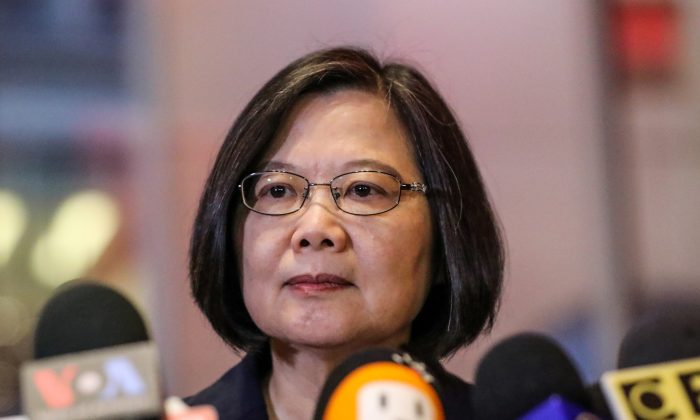 Taiwan President Tsai Ing-wen speaks at the Taipei Economic and Cultural Office in New York during her visit to the U.S., in Manhattan, N.Y., on July 11, 2019. (Jeenah Moon/Reuters)
US-China Relations

TAIPEI, Taiwan—Washington-based Freedom House, a nonprofit partially funded by the U.S. government, has taken to its Facebook page on July 16 to voice support for Taiwan amid the Chinese regime’s increased pressure.

Taiwan is a de-facto country with its own elected officials, constitution, and currency. However, Beijing considers its democratic neighbor a renegade province that must be united with the mainland one day, with military force if necessary.

The day prior, Freedom House also published on its website a speech given by its president, Michael J. Abramowitz, at a banquet in New York City on July 12 to welcome Taiwanese President Tsai Ing-wen.

The dinner was hosted by the Taipei Economic and Cultural Representative Office in New York, at the Grand Hyatt hotel in Manhattan, according to Taiwanese media.

#NEDemocracy/@freedomhouse recognized democratic achievements of Taiwan w/ @iingwen at dinner hosted by @TECRO_USA. Presented was a gift for the people of Taiwan – a framed print of “The Goddess of Democracy” by artist Thomas Marsh. https://t.co/nu0fpxaF8L pic.twitter.com/fiRAqXd9jv

“President Tsai, on behalf of Freedom House, I want to express how deeply moved we are to have you with us in the United States. You have one of the world’s toughest jobs,” Abramowitz said.

Abramowitz explained: “You must endure the relentless pressure from a powerful neighbor, a country with a massive economy and sophisticated military capacity, which regards your democratic freedoms—by way of the extraordinary contrast they present—as an existential threat to its own regime of control, regimentation, and censorship.”

Tsai had left Taiwan on July 11 to embark on a 12-day trip to the island’s four diplomatic allies in the Caribbean—Haiti, St. Christopher and Nevis, St. Vincent and the Grenadines, and St. Lucia. In recent months, Beijing has pressured Taiwan’s allies, mostly in the South Pacific and Latin America, into switching their diplomatic recognition to mainland China, whittling away Taiwan’s roster of international allies to 17.

Prior to arriving in Haiti, Tsai spent two days in New York as a stopover. After the conclusion of her Caribbean trip, she will have a stopover in Denver, Colorado, before returning to Taiwan on July 22.

While in New York City, Tsai gave a speech at Columbia University, during which she said that Taiwan stands with young protesters in Hong Kong who are fighting for their democratic freedoms.

Hongkongers have taken to the streets multiple times in the past month, in protest against a controversial extradition bill that they fear would put them at risk of being extradited to China to be tried in courts controlled by the Chinese Communist Party. Many are also worried that citizens of any nationality are at risk of being transferred to China while they are in Hong Kong, if the bill were to pass.

“Hong Kong’s experience under the ‘one country, two systems’ [model] has shown the world once and for all that authoritarianism and democracy cannot coexist,” Tsai said.

The governance model is currently used in Hong Kong, after the city’s sovereignty was handed over from Britain to China in 1997. Chinese leader Xi Jinping has suggested that Taiwan could be united with China under the same concept, drawing criticism from Taiwanese residents.

Taiwan President Tsai Ing-wen, as part of a two-day U.S. tour, participates in an academic discussion with members of the Columbia community. https://t.co/ZP4qQr3hpv pic.twitter.com/6a9inD8Pq5

At the New York banquet, Tsai also gave a speech, saying that Taiwan is a “beacon of democracy in the Indo-Pacific,” but that the island was “facing down encroaching authoritarianism,” an indirect reference to China.

Abramowitz echoed the idea in his remarks: “We remind our own leaders that in East Asia there is a model in Taiwan’s democratic values and resistance to tyranny that deserves America’s attention and support.”