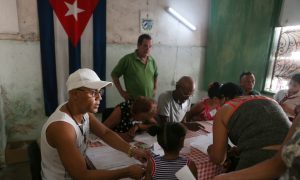 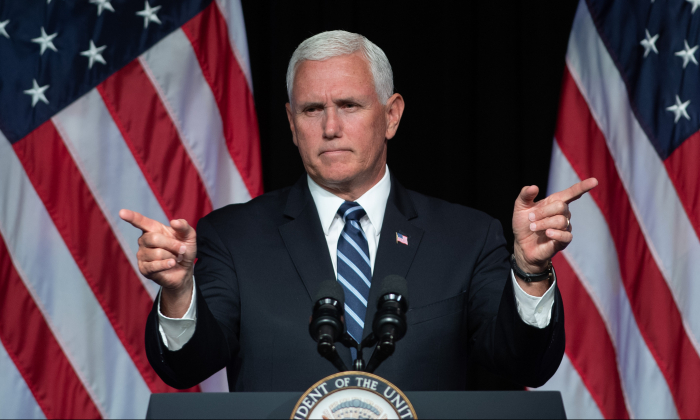 US Revokes Visas from 77 Associates of Socialist Dictator Nicolas Maduro

Vice President Mike Pence announced on March 6 that the U.S. State Department will revoke visas from 77 individuals tied to Venezuela’s socialist dictator, Nicolas Maduro. The announcement marks the latest move by U.S. officials to ramp up pressure on the illegitimate Maduro regime in the past several days.

“Today, the State Department is announcing that the United States will revoke 77 visas, including many officials of the Maduro regime and their families. We will continue to hold the Maduro regime accountable until ‘libertad’ is restored in Venezuela,” Pence said to enthusiastic applause during an annual Latino Coalition event in Washington.

Pence also called out Maduro’s communist Cuban allies for propping up the brutal regime, and for participating in myriad human rights abuses.

“The truth is … their oppressors do not act alone,” Pence said, referring to the Venezuelan people. “The truth is the only way Maduro clings to power is with the brutality of his supporters, and with the help he receives from communist Cuba.”

“As President Trump said in his speech to Venezuelan exiles in Miami not long ago, Maduro is not a Venezuelan patriot, he is a Cuban puppet,” Pence said.

The vice president’s remarks came less than a week after the State Department revoked 49 other visas from Maduro-aligned officials and their family members.

On March 1, the United States imposed targeted visa sanctions on specific individuals deemed responsible for helping Maduro undermine Venezuela’s democracy, and whose enriched family members may attempt to abscond to the safety of the United States.

“Maduro supporters that abuse or violate human rights, steal from the Venezuelan people, or undermine Venezuela’s democracy are not welcome in the United States,” read a State Department press release that announced the initial visa revocations.

“Neither are their family members who enjoy a privileged lifestyle at the expense of the liberty and prosperity of millions of Venezuelans,” the statement continued.

The U.S. Treasury Department imposed additional sanctions against six security officials of the Maduro regime, who were associated with obstructing the entry of international humanitarian aid and violence against those who attempted to deliver the assistance.

“Already in our beloved land! Venezuela, we have just passed migration and we will mobilize where our people are!” Guaidó wrote in Spanish on Twitter. “We enter Venezuela as free citizens, no one tells us otherwise.”

Guaidó is recognized by more than 50 nations as the legitimate leader of Venezuela. He called on the people of Venezuela to protest in the streets against Maduro on March 4 and 5.

“Guaido’s safe return to Venezuela is of the highest importance to the U.S.,” Vice President Mike Pence wrote on Twitter, minutes before Guaidó announced his return to Venezuela. “Any threats, violence, or intimidation against him will not be tolerated & will be met with swift response. The world is watching.”

“Any threats or acts against his safe return will be met with a strong and significant response from the United States and the international community,” Bolton wrote on Twitter.

The State Department also issued a statement of support, while Secretary of State Mike Pompeo simultaneously took aim at Cuba.

As Guaidó arrived in Venezuela, Pompeo announced a temporary suspension of the Libertad Act of 1996, with an exception allowing U.S nationals the right to sue Cuban “entities and sub-entities” under the control of Cuban military intelligence and security forces.

“Today I announce an exception to the 30-day suspension of #TitleIII of the Libertad Act,” Pompeo wrote on Twitter, adding, “We must hold #Cuba accountable and make whole U.S. claimants for assets seized by the Cuban government. Doing business with Cuba is not worth trafficking in confiscated property.”

Today I announce an exception to the 30-day suspension of #TitleIII of the Libertad Act. We must hold #Cuba accountable and make whole U.S. claimants for assets seized by the Cuban government. Doing business with Cuba is not worth trafficking in confiscated property.

A senior State Department official added via teleconference, that “nothing has changed” in Cuba since the passing of communist dictator Fidel Castro in 2016.

“We see that the constitution retains the same authoritarian political system and simply reinforces the communist party’s control over the island,” the official said, adding that, “Cuba continues to maintain close relations with Russia and China and has destabilized Venezuela, leading to mass flows of refugees and, of course, public health threats.”

Abrams said the United States presented a resolution in support of democracy in Venezuela, which received the requisite nine votes for passage. However, the resolution was then vetoed by Russia and China.

“The Russians put in a resolution which got four votes, which I would call pathetic, and I think the results in the council demonstrate that there is very broad international support for democracy in Venezuela and for the National Assembly and Interim President Guaido,” he said.