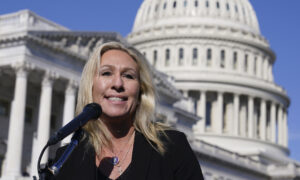 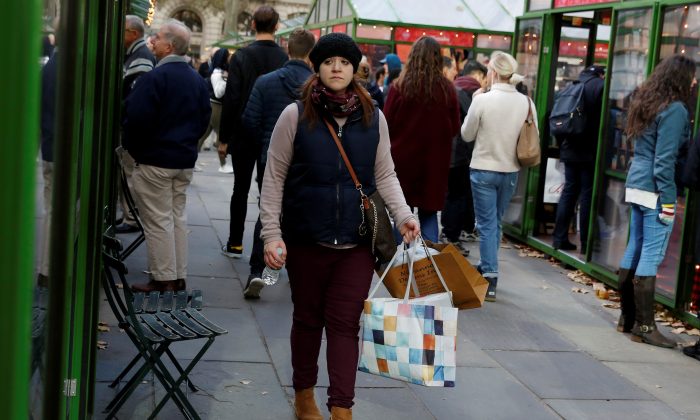 A woman walks with shopping bags at Bryant Park in New York, on Dec. 2, 2016. (Shannon Stapleton/Reuters)
US News

WASHINGTON—U.S. retail sales rebounded sharply in October as purchases of motor vehicles and building materials surged, but data for the prior two months was revised lower and the underlying trend suggested that consumer spending was probably slowing down.

Still, the report on Nov. 15 from the Commerce Department showed broad gains in sales ahead of the holiday shopping season, which bodes well for consumer spending and the overall economy as the fourth quarter gets underway.

“This morning’s release confirms our expectations of a strong holiday season,” said Tim Quinlan, a senior economist at Wells Fargo Securities in Charlotte, North Carolina. “But, as the calendar flips to 2019, we expect a further moderation in spending, as the boost from tax cuts, will start to fade for consumers.”

Economists polled by Reuters had forecast retail sales increasing 0.5 percent in October. Sales rose 4.6 percent from a year ago.

Data for September was revised lower to show core retail sales rising 0.3 percent instead of gaining 0.5 percent as previously reported. Core retail sales fell 0.2 percent in August rather than being unchanged.

While that suggests some loss of momentum in consumer spending, which accounts for more than two-thirds of U.S. economic activity, consumption is being supported by the Trump administration’s $1.5 trillion tax cut package. Declining oil prices are seen aiding retail sales in the months ahead.

A robust labor market, marked by a 3.7 percent unemployment rate, is also underpinning spending. The lowest jobless rate in nearly 49 years is boosting wages, with annual wage growth recording its biggest increase in 9-1/2 years in October.

Jobs market strength was underscored by a separate report from the Labor Department on Nov. 15 showing a marginal increase in the number of Americans filing for unemployment benefits last week.

Strong domestic demand and a tightening labor market support views that the Federal Reserve will increase interest rates in December for the fourth time this year. The U.S. central bank last Nov. 15 kept rates unchanged, but said data “indicates that the labor market has continued to strengthen and that economic activity has been rising at a strong rate.”

“The backdrop of strong growth and subdued inflation should keep the Fed on track for continued gradual rate hikes through the first half of 2019,” said Veronica Clark, an economist at Citigroup in New York.

The dollar was trading higher against a basket of currencies after the Nov. 15 data, while U.S. Treasury yields fell. Stocks on Wall Street were mixed.

The retail sales pace, if sustained, could keep the economy on a solid growth path even as business investment is slowing, the trade deficit is expected to deteriorate further and the housing market continues to weaken.

The economy’s strength was highlighted by higher-than-expected quarterly sales from Walmart on Nov. 15. The world’s largest retailer raised its full-year outlook.

Though the Commerce Department said it could not isolate the impact of Hurricanes Florence and Michael on October’s retail sales, the storms probably buoyed purchases of automobiles and building materials last month amid recovery efforts.

There were also increases in sales at clothing stores, online retailers, and service stations last month. Americans also spent more on hobbies and at bookstores, while cutting back on furniture purchases.

Other data on Nov. 15 offered a mixed picture of the manufacturing sector in early November. The New York Fed said its Empire State general business conditions index rose to a reading of 23.3 this month from 21.1 in October.

A slight moderation in the new orders index was offset by strong increases in labor market measures.

Separately, a survey from the Philadelphia Fed showed a slowing in factory activity in the mid-Atlantic region this month, with its current general activity index tumbling to a reading of 12.9 from 22.2 in October amid a sharp slowdown in new orders.

Firms, however, remained upbeat about business conditions over the next six months. There was also a strong improvement in capital expenditure plans.

“The real risk to the outlook for manufacturers remains global trade risks,” said Adam Ozimek, a senior economist at Moody’s Analytics in West Chester, Pennsylvania. “If this can be avoided, demand should remain strong for manufacturers.”