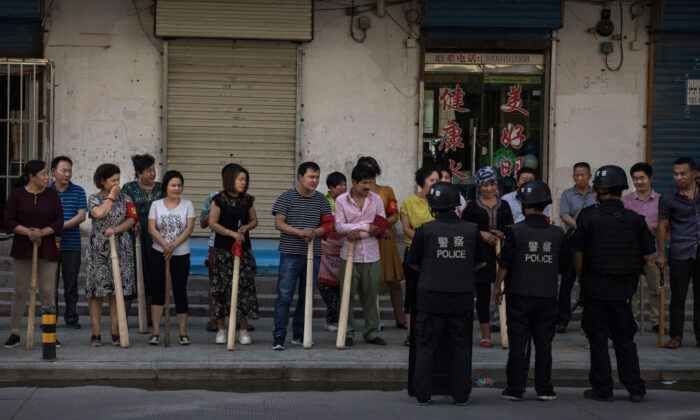 A mix of ethnic Uyghur and Han shopkeepers hold large wooden sticks as they are trained in security measures in the far western Xinjiang Province, China, on June 27, 2017. (Kevin Frayer/Getty Images)
Companies

Chinese video surveillance technology makers Lorex and Ezviz are both owned by companies headquartered in China that were added to the U.S. trade blacklist in 2019, over Beijing’s treatment of Uyghurs and other predominantly Muslim ethnic minorities.

In a 2019 statement, Secretary of Commerce Wilbur Ross said that “the U.S. Government and Department of Commerce cannot and will not tolerate the brutal suppression of ethnic minorities within China.”

Home Depot told TechCrunch that it was “committed to upholding the highest standards of ethical sourcing and [it] immediately stopped selling products from Lorex when this was brought to [its] attention.”

Best Buy also told TechCrunch that it was “discontinuing its relationship” with both Lorex and Ezviz.

Lowe’s dropped products from both Chinese companies after TechCrunch and IPVM, a surveillance industry research group based in Pennsylvania, inquired about cybersecurity and human rights concerns but did not respond directly to IPVM/TechCrunch, according to a report.

Home Depot pulled Lorex products off its website four days after IPVM and TechCrunch reached out to the home improvement store.

Lorex is a subsidiary of Dahua Technology, and Ezviz is a video surveillance camera brand owned by Hikvision.

According to a report by the Center for Strategic and International Studies (CSIS), citing a New York Times report, “Hikvision and Dahua created a facial recognition system designed to identify ethnic minorities but began to phase it out in 2018.”

However, Dahua said on its website that it “has not and never will develop solutions targeting any specific ethnic group.”

The Department of Commerce blacklisted 28 Chinese entities in October 2019, which prevented the companies from sourcing products and components from U.S. companies without approval from U.S. authorities.

CSIS also made reference to a New York Times’ report suggesting that the CCP (Chinese Communist Party) had been exporting surveillance technologies and methods to other governments around the globe, which poses a security concern to the United States.

Rep. Claudia Tenney (R-N.Y.) told IPVM in a statement that “no company in the United States should be accepting or selling any products that could potentially allow Chinese surveillance on millions of unknowing Americans.”

“Today, the Chinese Communist Party is embarking on a drive for tech-enabled global hegemony and American companies must not provide support for this effort,” Tenney added.

She also urged the state to enforce consumer protection and telecommunication security laws and “hold to account any firm that imports re-labeled prohibited goods and sells them to unwitting consumers.”