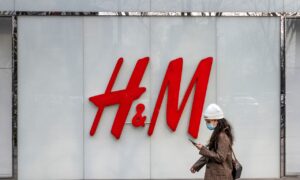 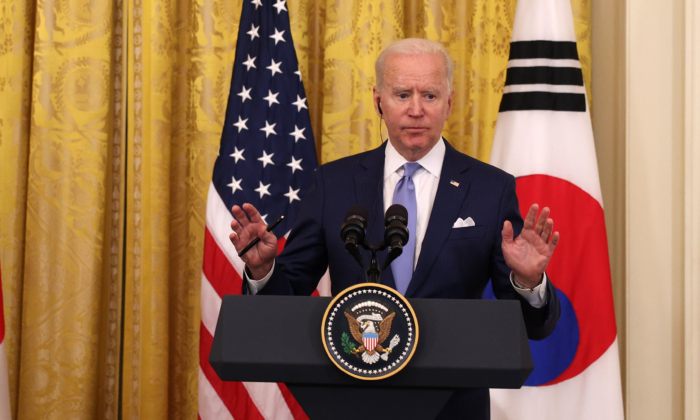 President Joe Biden and South Korean President Moon Jae-in (not shown) participate in a joint press conference in the East Room of the White House, in Washington, on May 21, 2021. (Anna Moneymaker/Getty Images)
US-China Relations

On May 21, 2021, U.S. President Joe Biden met with South Korean President Moon Jae-in at the White House. On the same day, Biden and Moon issued a joint statement, stating that the United States and South Korea will strengthen cooperation in areas of advanced technology, vaccines, climate issues, economics, and many others. Among these, advanced technology cooperation is given priority.

The United States and South Korea affirmed that they will build a strong and resilient supply chain and deepen cooperation in space and cyber domains, ensuring a trustworthy and value-oriented digital and technological ecosystem. The two sides committed to increasing mutual investments, including semiconductors and chips, as well as research and development cooperation in the fields of Artificial Intelligence (AI), next-generation communications networks (6G), quantum technology, biotechnology, and many others.

Hong Kong financial analyst Katherine Jiang Tianming said in an exclusive interview with The Epoch Times that the United States has been leading the decoupling of global supply chains from China. Looking back on the measures that the United States has taken in recent years, there are three parts. The resilient U.S.-South Korean supply chain is the third part of the U.S.-led global decoupling from China.

As the global supply chains decouple, the economy of the Chinese Communist Party (CCP) will be in an increasingly difficult position.

Part 1: Establishing a Decoupling Mechanism in the Regulatory and Legal Sectors

On May 15, 2019, former President Donald Trump signed an emergency executive order to secure information and communications technology and services supply chains, barring U.S. companies from using telecommunications equipment that poses a national security threat. This laid the basis for excluding Huawei Technologies Co., Ltd. (Huawei) from the U.S. telecommunications supply chain. On May 16, 2019, the U.S. Department of Commerce placed Huawei on the Entity List and issued a prohibition rule in May 2020 that any company must require licenses from the U.S. government for sales to Huawei of semiconductor products containing U.S. technology. This greatly inhibited Huawei’s ability to purchase key components such as chips in the United States.

On May 11, 2021, Biden extended Trump’s restriction on the CCP-backed Huawei. This was a further economic countermeasure by the U.S. government against the CCP after Biden’s 100-day supply chain review on chips, pharmaceuticals, rare earths, and other industries issued on Feb. 24, 2021, and the Strategic Competition Act of 2021 (pdf) passed by the U.S. Senate on April 21, 2021. On May 12, 2021, the Senate passed the Endless Frontier Act to strengthen U.S. investment in technology in another step to counter the CCP.

Jiang believes that the signing of these executive orders and the passing of these Acts have constituted a regulatory and legal mechanism for decoupling from China.

On May 6, the Taiwan External Trade Development Council (TAITRA) held a book launch event for “Roadmap to Resilient Supply Chains.” The preface of this book is inscribed with the names of not only TAITRA but also the American Institute in Taiwan.

“This clearly signals the world that the United States and Taiwan are jointly restructuring supply chains,” said Jiang.

“Roadmap to Resilient Supply Chains” clearly outlines the changes in the supply chains: the former supply chain model was that Taiwan first took orders, then outsourced intermediate goods such as components to China for assembly and exported the finished products to developed countries. However, the model will change. In general industries, such as clothing and hats, the CCP economy will still play an “assembly” role in the entire industrial chain, but Southeast Asian countries will step in and share a piece of the pie.

As to the strategically important industries, the CCP will be excluded from the entire industrial chain and Taiwan will cooperate with like-minded nations in production and technology. These key industries include semiconductors, personal protective equipment (PPE), electric vehicles, etc.

The United States recently increased cooperation with Taiwanese manufacturers. On May 20, U.S. time, U.S. Secretary of Commerce Gina M. Raimondo once again held a semiconductor virtual summit, where one of the focal issues was the shortage of semiconductor automotive chips. The leader of Taiwan’s foundry production, Taiwan Semiconductor Manufacturing Company (TSMC), was also invited to the summit and announced that, in order to support the global automotive industry, it has increased microcontroller unit (MCU) production by 60 percent over last year’s levels. The company has taken “unprecedented action” and will continue to cooperate with the automotive supply chain to mitigate the ongoing chip shortage crisis.

TSMC announced last year that it would invest more than $10 billion to build a foundry plant in Arizona. Taiwanese media Central News Agency (CNA) and Liberty Times Finance once reported that Europe and Japan had extended an olive branch to TSMC, inviting TSMC to build plants there.

Jiang stated that TSMC is like a miniature of Taiwan. Taiwan’s high-tech superiority and the global chip shortage have accentuated the global popularity of TSMC and the strategic importance of Taiwan in global supply chains. The United States has cooperated with Taiwan to restructure the supply chain, while they have also made it clear that removing the CCP from strategically important industries is the second part of decoupling the global industrial chain from the CCP.

Notably, the future supply chain model outlined in the “Roadmap to Resilient Supply Chains” does not include South Korea. Jiang believes that it might be because South Korea has a deeper economic relationship with the CCP.

South Korea plays a pivotal role in global advanced technology. According to TrendForce, the South Korean company, Samsung Electronics Co., Ltd. (Samsung) is the second-largest manufacturer in the global foundry market after TSMC, and is well ahead of its global counterparts in the dynamic random-access memory (DRAM) and NAND flash memory markets. In the first quarter of 2021, Samsung held 42 percent of the DRAM market share, and SK Hynix Inc. (SK Hynix), another South Korean company, occupied 29 percent. Micron Technology, Inc. (Micron), an American company held 23 percent.

Samsung has heavily invested in the CCP’s economy. According to Samsung’s 2020 annual report (pdf), as of Dec. 31, 2020, it has established 33 subsidiaries, including a semiconductor manufacturing plant in Xi’an, Shaanxi Province. In 2020, Samsung’s sales revenue in China is second only to that of the United States and Europe, and has exceeded that of South Korea and the African and Asian regions, excluding China.

On May 21, the presidents of the United States and South Korea met at the White House and issued a joint statement, stating that the two sides will build a resilient supply chain in advanced technology pursuant to a shared value of protecting open markets, democracy, human rights, and the protection of intellectual property rights. Jiang said that the CCP is incompatible with the United States and South Korea in regards to the open market, democracy, human rights, and intellectual property protection.

Jiang pointed out that the decoupling of U.S. supply chains from the CCP will gradually cause an economic predicament for the CCP because there are a number of middle-end and low-end industries that are technically deficient.

Just like Huawei, its smartphone business has experienced a severe decline after two consecutive years of U.S. sanctions. Huawei, to some extent, mirrors the economic state of the CCP.