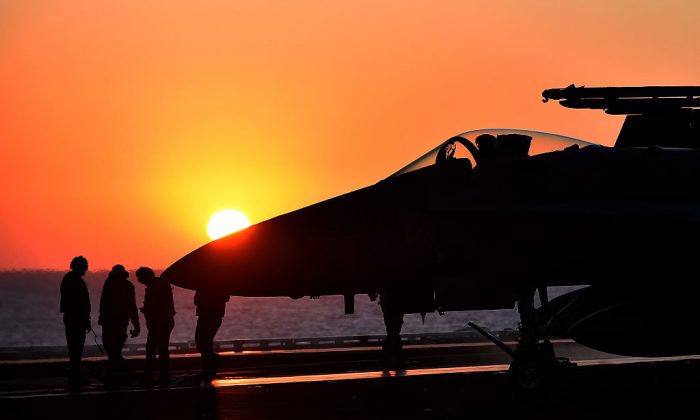 United States forces in Syria will not hesitate to defend themselves or their partners, a Pentagon spokesman said on Monday following a threat issued by the Russian defense ministry earlier in the day.

“We do not seek conflict with any party in Syria other than ISIS, but we will not hesitate to defend ourselves or our partners if threatened,” Capt. Jeff Davis told The Washington Examiner.

Davis’ statement is line with a statement issued earlier by the U.S. Central Command, which stated that the U.S.-led coalition does “not seek to fight the Syrian regime, Russian or pro-regime forces” but would not “hesitate to defend itself or its “partnered forces from any threat.”

Rhetoric between the United States and Russia has escalated since an American jet shot down a Syrian plane on Sunday. The United States claims that the Syrian jet dropped bombs on U.S.-allied Syrian forces. The Syrians assert that the plane attacked the ISIS terrorist group.

The Russian defense ministry said on Monday that it will treat any aircraft in Syria west of the Euphrates river as a target. The Russians also cut off the hotline with the United States meant to prevent incidents as the two militaries operate in a dynamic and complex war zone.

Gen. Joseph Dunford, Chairman of the Joint Chiefs of Staff, said he was confident that there’s still a means of communicating with the Russians, according to Fox News.

“I’m also confident that our forces have the capability to take care of themselves,” Dunford said during a speech at the National Press Club, Fox News reported.

The U.S. military confirmed that one of its F-18 Super Hornets shot down a Syrian SU-22 jet in the southern Raqqa countryside after it dropped bombs on U.S.-allied forces.

U.S. Central Command later issued a statement saying the Syrian plane was downed “in collective self-defense of Coalition-partnered forces,” identified as fighters of the Syrian Democratic Forces (SDF), near Tabqah.

It said that “pro-Syrian regime forces” had earlier attacked an SDF-held town south of Tabqa and wounded a number of fighters, driving them from the town.

Before it downed the plane, the coalition had contacted its Russian counterparts through an established “de-confliction line” to de-escalate the situation.