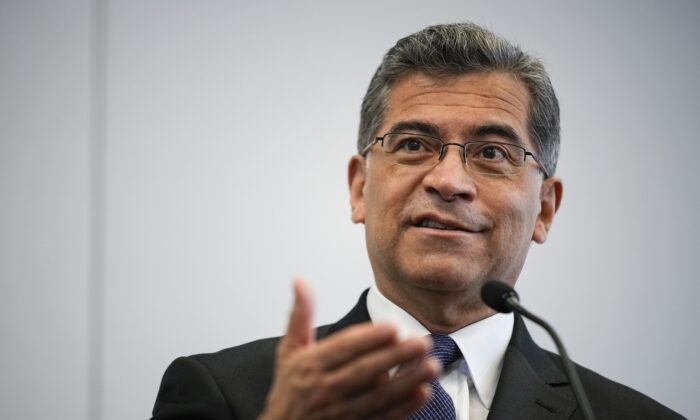 Secretary of Health and Human Services Xavier Becerra speaks to the press in Washington on May 5, 2021. (Drew Angerer/Getty Images)
AMERICA

The Department of Health and Human Services (HHS) on Monday renewed the COVID-19 public health emergency determination for another 90 days.

HHS secretary Xavier Becerra said in a statement that the extension followed consultation with public health officials and comes “as a result of the continued consequences” of the COVID-19 pandemic.

The initial determination that a public health emergency exists due to COVID-19, the disease caused by the CCP (Chinese Communist Party) virus, was made on Jan. 31, 2020, by former HHS secretary Alex Azar, and has been extended every three months ever since.

Public health emergency declarations enable such measures as emergency use authorization of vaccines and unlocking of funds to support the pandemic response.

“The extension will help hospitals and health systems combat COVID-19 in their communities,” the American Hospital Association said in a statement.

The move comes as the average of new daily infections this week is up 66 percent from last week and 145 percent from two weeks ago, with cases on the rise in 44 states, according to data from Johns Hopkins University.

Dr. Vivek Murthy, U.S. Surgeon General, told CNN in an interview that aired Tuesday that, “we shouldn’t let down our guard until cases not only come down but stay down, and right now cases are actually going up. Cases are going up, hospitalizations are going up, death rates are ticking up.”

Meanwhile, governors in some Republican-led states have passed laws to limit the ability of local authorities to impose COVID-19 mitigation measures such as mask mandates or lockdowns, arguing that government overreach exploded during the pandemic, impacting individual liberties and crushing businesses.

Florida Gov. Ron DeSantis, a Republican, in May signed a law that allows the governor to invalidate any local order that “unnecessarily restricts individual rights or liberties,” while providing legal safeguards to prevent local governments from imposing arbitrary closures.

Opponents of state laws that rein in the power of local authorities argue that such limits reduce the ability to respond to future emergencies.

“Our hands are tied and I think that’s a mistake,” said Dr. Shad Marvasti, associate professor at the University of Arizona College of Medicine, in remarks to Bloomberg Law.