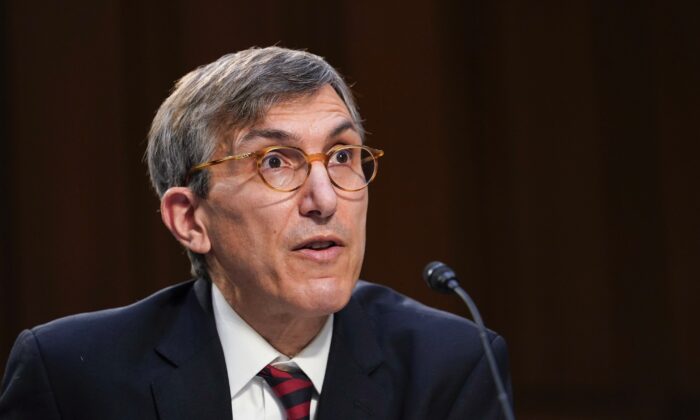 The U.S. Food and Drug Administration (FDA) will not enforce an effectiveness standard when considering whether to authorize one or more COVID-19 vaccines for young children, a top member of Congress said.

Dr. Peter Marks, head of the Center for Biologics Evaluation and Research, said during a recent briefing that the FDA “would not withhold authorization for a pediatric vaccine solely because it did not reach a 50 percent efficacy threshold at blocking symptomatic infection—a requirement that had been previously listed in FDA guidance,” Rep. Jim Clyburn (D-S.C.), chairman of the House Select Subcommittee on the Coronavirus Crisis, said in a summary of the briefing released on May 9.

Moderna in April asked the FDA for emergency use authorization for its vaccine for children as young as 6 months old, even though a clinical trial concluded its efficacy in preventing infection was below 50 percent.

In 2020, the FDA suggested it would only authorize COVID-19 vaccines that were 50 percent or more effective. But the agency later provided a loophole for the vaccines for children, saying efficacy “may be inferred” through immunobridging.

The technique features comparing the immune response triggered by a vaccine to the response seen in populations for whom the shot is already cleared.

All three of the vaccines available in the United States have performed much worse against infection over time, particularly since the Omicron variant of the CCP virus emerged in late 2021.

The primary vaccination regimen of the shots provides little protection below the 50 percent threshold for adults, according to the latest data.

Based on that, many experts have expressed concern about authorizing a vaccine for children, a population that is at little risk of contracting severe illness from the virus.

But in the new briefing, Marks said the FDA will likely authorize the vaccines for young children.

“If these vaccines seem to be mirroring efficacy in adults and just seem to be less effective against Omicron like they are for adults, we will probably still authorize,” Marks was quoted as saying by Clyburn. “The goal here is to get some protection in sooner rather than later.”

The FDA, which didn’t respond to a request for comment, is scheduled to consult its expert advisory panel on the matter in June.

“The FDA apparently knew from the beginning of the COVID-19 vaccine development process that the vaccines would not provide sterilizing immunity, which is why the bar for proving efficacy was set at a low 50 percent for preventing severe COVID symptoms rather than preventing infection,” she told The Epoch Times in an email.

Noting that most infections in children trigger few or no symptoms, she said that “lowering the bar for proving efficacy even further will compromise the promised benefits of the COVID vaccine for children when weighed against potential risks.”