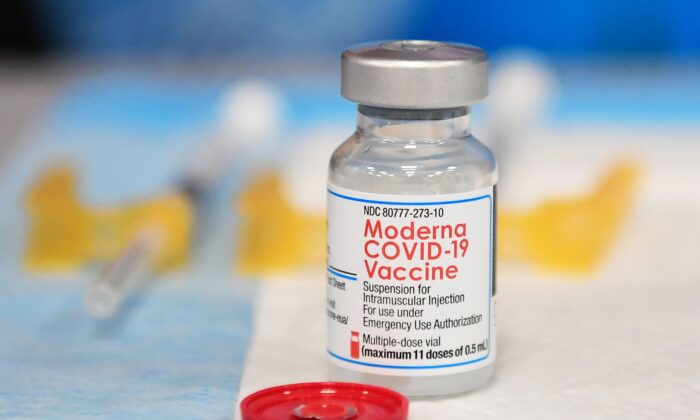 US Regulators Approve Moderna’s COVID-19 Vaccine for All Adults

The U.S. Food and Drug Administration (FDA) on Monday approved Moderna’s COVID-19 vaccine for the prevention of the virus that causes COVID-19 for all Americans 18 and older, despite the vaccine providing little protection against the illness since the emergence of the Omicron virus variant.

The FDA said the vaccine was 93 percent effective in preventing the CCP (Chinese Communist Party) virus, which causes COVID-19, known as SARS-CoV-2.

But the data that were analyzed, which also showed the shot was 98 percent effective in preventing severe disease, were gathered before the emergence of Omicron.

The relatively new variant easily bypasses protection from the primary series of Moderna’s shot and the two other COVID-19 vaccines used in the United States, according to studies and real-world data, including recent research endorsed by the Centers for Disease Control and Prevention.

Dr. Peter McCullough, a cardiologist at Baylor University Medical Center, said that the approval “is not clinically justifiable nor supported by clinical data.”

“We would need a large randomized trial in patients with Omicron with the composite outcome of hospitalization and death. Given the very poor safety profile of the COVID-19 vaccines, we would clearly need a positive benefit-to-risk relationship before these vaccines could ever be embraced in clinical practice. Given the mild nature of Omicron and its easy management, it is unlikely any vaccine will have a role for this variant,” he told The Epoch Times in an email.

Dr. Harvey Risch, a professor of epidemiology at the Yale School of Public Health, added that the FDA “should have required evidence bearing upon Omicron as part of its deliberations, now that Delta is going away.”

Dr. Thomas Russo, an infectious diseases expert at the Jacobs School of Medicine and Biomedical Sciences at the University at Buffalo, disagreed.

“We have a huge body of data that supports that the benefit is significant and it’s extraordinarily safe,” he told The Epoch Times. “I’m actually a little surprised that [it] took this long but it looks like the FDA did all of its due diligence to make sure that everything was in order.”

An FDA spokesperson in an email to The Epoch Times declined to answer when asked why post-Omicron data weren’t examined before granting approval and whether officials were concerned about the vaccine not protecting well against the new variant.

The FDA said the package it analyzed included preclinical and clinical data from a Phase 3 trial that followed some 15,000 vaccine recipients and was used to support the agency’s emergency use authorization of the same vaccine in December 2020.

The agency analyzed the data to determine whether the vaccine met standards for approval.

The approved vaccine will be marketed as Spikevax. It has the same formulation as the authorized vaccine and can be used interchangeably with the authorized shot, according to the FDA. Spikevax was previously approved in multiple other countries, including Canada, Israel, and Japan.

“The public can be assured that Spikevax meets the FDA’s high standards for safety, effectiveness and manufacturing quality required of any vaccine approved for use in the United States,” Dr. Janet Woodcock, the agency’s acting director, said in a statement.

“The FDA’s medical and scientific experts conducted a thorough evaluation of the scientific data and information included in the application pertaining to the safety, effectiveness, and manufacturing quality of Spikevax,” added Dr. Peter Marks, the director of the FDA’s Center for Biologics Evaluation and Research.

The document outlining the decision, known as a Summary Basis for Regulatory Action, was released on Feb. 1 (pdf).

The approval is only for the primary Moderna series, which consists of two shots taken approximately a month apart.

The primary series is of little benefit in terms of protecting against infection since Omicron became dominant, according to research on the variant’s effects. Federal health officials recommend people get a Moderna booster five months after their second shot to get better protection against the CCP virus, though it remains unclear how long the boost lasts.

The Moderna product is the second COVID-19 vaccine to receive approval from the FDA, which approved Pfizer’s jab in August 2021.

Stéphane Bancel, Moderna’s CEO, said that the approval was “a momentous milestone in Moderna’s history as it is our first product to achieve licensure in the U.S.”

“We are grateful to the U.S. FDA for their thorough review of our application. We are humbled by the role that Spikevax is playing to help end this pandemic,” he added.