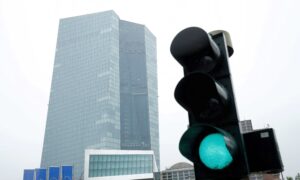 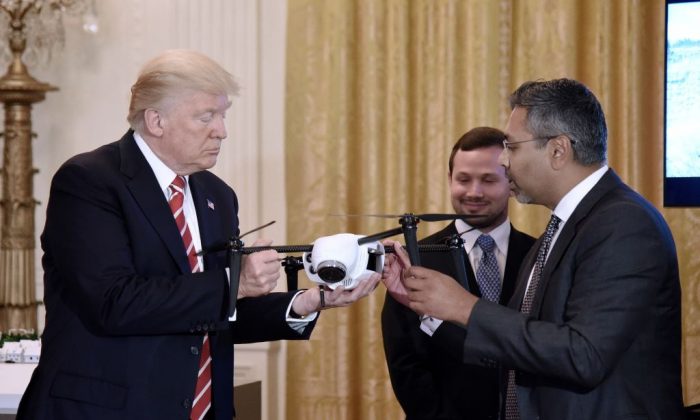 President Donald Trump holds a drone as George Mathew CEO & Chairman of Kespry explains how it works during the American Leadership in Emerging Technology Event in the East Room of the White House in Washington, June 22, 2017 (Olivier Douliery-Pool/Getty Images)
Economies

WASHINGTON—The United States is back as the “most competitive economy” in the world, reclaiming the No. 1 spot for the first time since 2008 in the World Economic Forum’s (WEF) annual global survey. However, there is a real challenge in maintaining that position, as the United States keeps losing its capability for innovation in addition to its factories, experts warn.

The United States is at the pinnacle of global success, according to WEF’s 2018 survey, which ranks countries according to 12 drivers of competitiveness. America tops the list of 140 countries in business dynamism, labor markets, and the financial system. In addition, it has near-perfect scores on innovation and market size.

All these factors contribute to the country’s vibrant innovation ecosystem, making it a “super innovator,” says the WEF report.

However, its innovation ecosystem faces challenges as more companies continue to offshore their research and development.

“As more production of advanced technologies has moved abroad, more research and product development has moved with it due to the close ties between product and process technologies,” according to a report by Alliance for Manufacturing Foresight (MForesight), a nonprofit consortium led by representatives from the U.S. manufacturing community.

Since 2000, more than 70,000 factories have closed or moved overseas, threatening the nation’s innovation ecosystem, according to the report. It has affected the ability of U.S. innovators to make new products.

The Lifeblood of the Country

Innovation has been the lifeblood of the country since its founding, according to Secretary of Commerce Wilbur Ross.

A milestone was achieved in June when Ross and President Donald Trump signed the 10-millionth U.S. patent issued by the Patent and Trademark Office. President George Washington signed the first U.S. patent 228 years ago.

The United States was once the world’s leader in manufacturing. After World War II, the country heavily invested in research and development and was significantly ahead of other countries in employing cutting-edge technologies. However, that picture started to change in the 1980s.

When a country loses the capability to manufacture, it loses the ability to innovate and compete as well, Harvard professors Gary Pisano and Willy Shih say in their book “Producing Prosperity: Why America Needs a Manufacturing Renaissance.”

For decades, many large U.S. manufacturers moved their operations to low-cost countries, primarily China. Such moves were expected to bring cost benefits and competitive advantage. It did bring benefit, but at the expense of harming the “industrial commons” in the United States, the authors said.

Industries form industrial commons that operate within an “ecosystem” and share know-how and capabilities. This know-how is used by the members of the ecosystem, including workers, companies, suppliers, and universities. The decline of one industry affects the whole ecosystem and leads to the erosion of the industrial commons in that region.

Business leaders and politicians are now seeing the fallout of offshoring decisions in some industries in which the United States has fallen behind in its ability to compete.

In solar power, for example, a significant amount of the required know-how and production infrastructure have shifted to Asia over time.

Although solar cells, also called photovoltaic (PV) cells, were first invented in the United States, today only 3.7 percent of PV production is based in North America (United States and Canada); 85 percent is in Asia, with China and Taiwan leading the market, according to the National Renewable Energy Laboratory.

‘Invent There, Manufacture There’

The case of solar PV isn’t an isolated example. There is a long list of “endangered species” of American industries, from semiconductors to rechargeable batteries.

“It all started with the globalization of supply chains,” said Pisano in an interview. “Companies thought they could move their manufacturing elsewhere and be cost-competitive. They could design here and manufacture there.”

This assumption, however, failed to recognize the strong interaction between inventing a product and producing it.

And today, as many firms shift their innovation overseas, the new trend is “invent there, manufacture there,” according to the MForesight report.