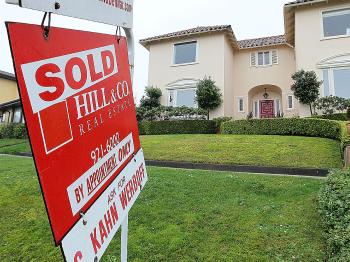 Heide B. Malhotra
View profile
Follow
biggersmaller
Print
Fortunes of the U.S. real estate market, in turmoil since 2007, are finally looking up, according to real estate experts.

During December 2009, almost 5 percent more homes were sold nationwide than during the same month in 2008, according to the National Association of Realtors (NAR).

“The surge in home sales was driven by buyers responding strongly to the tax credit combined with record low mortgage interest rates,” said Lawrence Yun, chief economist at NAR, in a recent statement.

The federal tax credit program, set to expire April 30, allows up to $8,000 for eligible new homebuyers and up to $6,500 for existing homeowners. There are a number of caveats attached, including the price of the house, occupancy, and income limits, but many buyers qualify.

Roughly one-fifth of houses sold across the United States in December were foreclosed homes and in some areas, such as Merced, Calif., sales of foreclosed homes reached close to two-thirds of all property sales, according to Zillow.com, a Web-based real estate marketplace.

Yun predicted that with housing inventories steadily decreasing, when the usual housing sales season commences, housing prices will rise again as competition among buyers will heat up.

But there exists another side to inventory levels that the NAR may not have taken into consideration. Foreclosures, although having leveled off, are still not trending down notably, thus contributing to unusually high inventory levels, according to Zillow.com.

Zillow remains negative in its outlook as foreclosures “across the country reached a peak in December, with more than one in every thousand homes being foreclosed—a number not reached since Zillow began recording national foreclosure data in 2000,” according to a press release.

Furthermore, government support, through lowering interest rates and providing tax credits, has kept the housing sales on an even keel during 2009. However, with the tax credit disappearing in April and interest rates most likely edging up in the near future, the housing market will trend down, but not as pronounced as at the beginning of the financial crisis.

NAR indicates that housing prices have perked up, and some sellers could even sell their homes at their asking price in some areas, including in Houston, Oklahoma City, San Francisco, San Jose, and Denver.

Explaining different statistical information, NAR suggests that the sale of distressed homes, accounting for about one-third of all housing sales, keeps the average sale price unrealistically low and misrepresents the true national average sale price, as they generally are sold at a discount.

Areas such as Boston, New York, and Nassau-Suffolk Counties on Long Island, considered to be trendier places with higher priced housing that is more difficult to sell, are stabilizing.

“In the Northeast, markets with lower median prices that have avoided wide swings, such as Buffalo, are generally showing consistent price gains,” Yun said.

Zillow.com has a different take and advises in its latest real estate market report that house values are still trending down. In roughly one-fifth of all markets, including San Diego, Atlanta, and Boston, prices had leveled off or had shown increases for some time, but began to trend down again in December 2009.

Real estate pricing reported by many experts misses one significant ingredient—pricing was below what the seller had paid for the house. The prices may be going up from what they were after the market collapsed, but not enough to break even for roughly one-third of all sellers.

Most buyers have kept away from adjustable-rate mortgages and are opting for long-term fixed-rate mortgages. Such tactic allows the homebuyer to stay within budget and eliminate interest rate risk.

Since the beginning of 2010, roughly two-thirds of all home loans were refinancing loans, taken out by homeowners with adjustable interest rates, especially since the 30-year fixed-rate mortgage has been quite low over the past weeks, according to Freddie Mac.

“Interest rates on 30-year fixed-rate mortgages are below 5 percent for a third week this year, which helps a number of homeowners to refinance their existing housing debt,” said Frank Nothaft, vice president and chief economist at Freddie Mac.

The majority of mortgage funding since the economic downturn, when lending activities came to a grinding halt, has been through the government-sponsored enterprises Freddie Mac and Fannie Mae. They pumped almost three-quarters of all 2009 mortgage liquidity into the market. In all, these firms purchased or guaranteed $548 billion in mortgage loans and securities in 2009.

Private capital has not dried up, but distressed real estate assets are in short supply, according to a panel discussion published in an article by Knowledge @ Wharton (KW).

His firm was ready to take the plunge with $1.9 billion in available cash. The company bid $12.5 million for one real estate deal in California, far below the $20 million from what the front-runner had bid.

The difference today versus the real estate boom is that the firms are no longer pushed into real estate ventures without thorough analysis.

The panel members agreed that there is a lot of capital in the market.

“However, the problem is in ‘applying today’s new money to existing situations,’ because investors now shun the high risk associated with many of the assets created during the property boom,” stated the KW article, quoting Jackson Hseih, vice chairman at UBS.