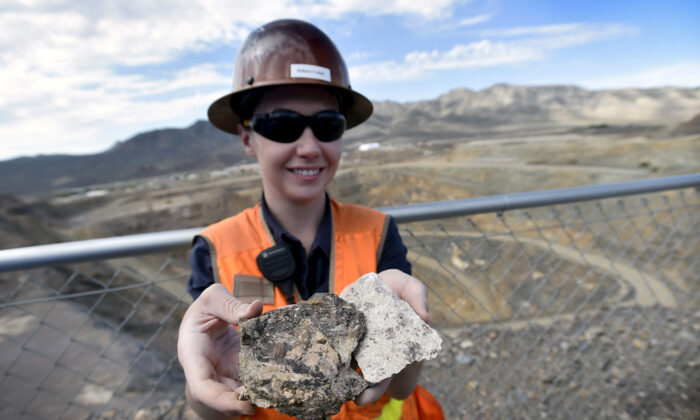 A piece of ore containing rare earths is displayed during a tour of a rare earth mineral mine in California on June 29, 2015. (David Becker/Reuters)
By Alan McDonnell

The developers of the Round Top Mountain rare earth element (pdf) (REE) mine in Texas are building a pilot plant to process the mine’s ore in the United States, according to a press release. The development means that the U.S. can further increase supply-chain security for the provision of REE minerals and critical minerals to strategic industries such as defense and electronics while reducing reliance on supplies from China—which currently supplies over 80 percent of REEs globally.

Rare earth elements are notoriously difficult to process and refine. While the United States and its allies also have considerable REE deposits, China’s lax environmental standards combined with low labor costs and a raft of government subsidies have allowed it to slash REE production costs, undercutting some processors in the West to the point of bankruptcy. Illegal and undocumented production is also commonplace in China, and is responsible for 20 to 40 percent of Chinese production, according to the U.S. Geological Survey (USGS). China’s virtual monopoly on the REE industry has meant that even the ore mined at California’s Mountain Pass mine is currently being shipped to China for processing.

China’s communist regime is not afraid to remind geopolitical rivals of its monopoly, however. During their 2010 standoff over the disputed Senkaku Islands, China cut off exports of REEs to Japan—though the Chinese maintained it was merely introducing export quotas to protect the environment. In May of this year, China threatened to cut off rare earth exports to the United States as part of its trade war tactics against the Trump administration.

Now, however, Texas Mineral Resources Corp has teamed up with a privately held company, USA Rare Earth, to invest between $10 and $12 million in a pilot plant with the capacity to refine over 220 pounds of rare earths annually. These relatively small amounts will allow the partners to secure deals with prospective customers and to demonstrate the economic viability of their processes—a key factor in obtaining investment capital for the full-scale plant they plan to build near the Round Top mine (pdf).

Situated in the mining-industry hotbed of Colorado, the pilot plant will be located close to the broad consulting and academic community in the region. It is planned to relocate the pilot plant to Texas by 2010, with production at the full-scale facility set for 2023.

According to the Mineral Commodity Summaries for 2019 published by the U.S. Department of the Interior (DOI) and the USGS, the United States imported rare-earth compounds and metals with a value of only $160 million in 2018, which was an increase of around 16 percent over 2017 imports. While the monetary value of these minerals is low compared to, e.g., the value of steel produced in the United States (at some $127 billion in 2018), rare earth elements are essential for applications such as catalysts (60 percent), ceramics and glass (15 percent), metallurgical applications and alloys (10 percent), and polishing (10 percent). According to the USGS, “Substitutes are available for many applications but generally are less effective.”

According to Jim Litinsky, CEO of JHL Capital Group and co-chair of MP Materials, the owner-operator of the Mountain Pass mine, construction finished recently on a state-of-the-art, environmentally friendly separation facility at Mountain Pass, which is expected to be producing fully separated rare earth elements next year. In an interview with Fox News in June, Litinsky said that “The job we signed up to do was to return the rare earth industry to the United States of America. …We’re ready to provide the product: We’re going to be doing it next year.”

A processor of rare earth materials, Blue Line Corp signed a memorandum of understanding with Australia’s Lynas Corp (pdf) in June to work on an REE separation facility at Blue Line’s Hondo site in Texas. The partners claim that the joint venture would be the most significant medium and heavy (e.g. terbium, dysprosium) rare earth separation facilities outside of China. Lynas Corp will be the majority shareholder in the venture.

Lynas operates an ore concentration plant at its Mount Weld mine in Western Australia, and has plans to relocate cracking and leaching operations to Mount Weld by 2025. It plans to increase current Neodymium-Praseodymium (NdPr) production from 6,500 tons annually to 11,500 tons over the same time period. Lynas also operates a separation plant in Malaysia.

According to a Department of the Interior press release, “Under Executive Order 13817 signed by President Trump, ‘critical minerals’ are non-fuel mineral or mineral materials that are essential to the economic and national security of the United States, that have a supply chain vulnerable to disruption, and that serve an essential function in the manufacturing of a product, the absence of which would have significant consequences for the economy or national security.”

US Military Involvement in REEs

According to a Reuters report, the U.S. Military is also planning to fund construction of rare earth processing facilities on American soil. The report said that “Texas Mineral Resources and USA Rare Earth did apply for funding from the U.S. military, though they said such funding is not needed to build out their pilot plant.”

In a further development, the Military is planning to create a stockpile of rare earth-containing magnets essential for F-35 fighter jets and Javelin missiles. However, Japanese company Hitachi Metals Ltd. holds the patent for the processing of NdFeB magnets. Hitachi had invested in a magnet production facility in North Carolina, but closed the NdFeB facility around 2015 when it was no longer economically viable. The facility’s equipment has since been offered for sale.

Urban Metals of Austin and San Marcos, Texas, recycles magnets and old hard-disk drives to produce new NdFeB magnet materials. It is working on a new production facility that will be ramped up over the next 3 years. Meanwhile, the strained supply-chain relationship with China has thrown a lifeline to a number of other U.S. companies active in the field.

According to the US Magnetic Materials Association (USMMA), the Association “remains concerned about the ability of the U.S. defense industrial base to meet its needs for ‘strategic and critical’ heavy rare earths, key elements in the production of magnetic materials. Heavy rare earth elements are essential to the production of magnets contained in nearly every fifth-generation weapon system being deployed or developed today: the Joint Strike Fighter, the Virginia-class Attack Submarine, and stealth systems for the Blackhawk helicopter.”

“USMMA and its member companies have long expressed their concerns to the U.S. Government about the availability of and dependency on Chinese rare earth elements for national security and energy requirements,” the Association warned in a statement (pdf) in 2012. “USMMA’s member companies are capable of creating a stable and secure supply chain for rare earth components, and we continue to urge the U.S. Government to explore solutions to its ongoing supply chain vulnerability.”

In a letter to Congress from March 27, 2012, the USMMA stressed the gravity of the Chinese monopoly and the neglect of American strategic interests. “Unfortunately, our domestic rare earths industry is nearly nonexistent. The People’s Republic of China now produces more than 94 percent of the rare earth oxide on the planet, as well as nearly all rare earth metal and alloy. Only one company in the U.S. currently mines rare earths, and it has stated its intent to conduct significant rare earth processing of its U.S.-mined rare earths inside China. China has also used this monopoly status to aggressively pursue its economic and regional diplomatic goals, especially through the use of production and export quotas. These policies have resulted in the relocation to China of nearly all American rare earth product manufacturers, along with thousands of American jobs—all using technology developed here.”