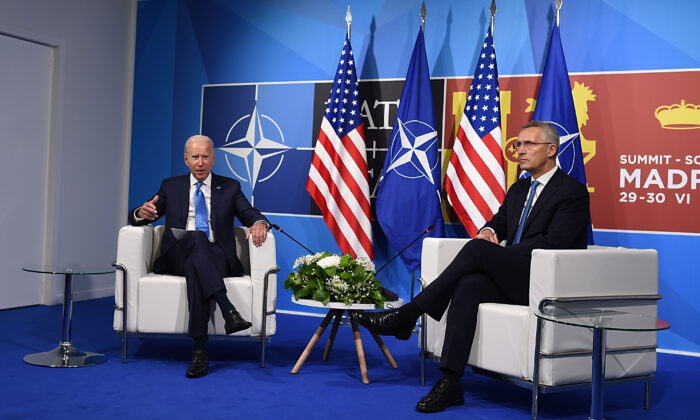 Allen Zhong
senior writer
Allen Zhong is a long-time writer and reporter for The Epoch Times. He joined the Epoch Media Group in 2012. His main focus is on U.S. politics. Send him your story ideas: allen.zhong@epochtimes.nyc
View profile
Follow
and Tom Ozimek

The United States will create a new permanent army headquarters in Poland and deploy additional land, air, and sea forces across the length and breadth of Europe in response to threats from Russia, President Joe Biden said on June 29.

“I’m announcing the United States will enhance our force posture in Europe and respond to the changed security environment, as well as strengthening our collective security,” he told reporters during a briefing joined by NATO Secretary-General Jens Stoltenberg in Madrid.

“We’re going to continue to adjust our posture based on the threat, in close consultation with our allies.”

The Biden administration said the United States would take several additional actions including some deployments already announced since the Russian invasion of Ukraine:

The White House said that the new stationing of U.S. forces in Europe is to “support NATO and to deter any aggression against our allies.”

“We’re sending an unmistakable message, in my view—and I think yours as well—that NATO is strong, united, and the steps we’re taking during this summit are going to further augment our collective strength,” Biden told reporters during the briefing.

“We’re going to make sure that NATO is ready to meet threats from all directions across every domain,” Biden said. “We’re proving that NATO is more needed now than it ever has been.”

The United States has not communicated with Russia about the decisions since there’s no requirement to do so.

“There has been no communication with Moscow about these changes, nor is there a requirement to do that,” National Security Council spokesman John Kirby told reporters during a press call.

Polish President Andrzej Duda hailed the decision for a permanent NATO base in Poland, a move that Warsaw has long lobbied for.

Biden “said clearly that for the first time in NATO history, there will be a permanent U.S. military presence in Poland in the form of the 5th Corps command. It’s a long-awaited decision,” Duda said in a tweet.