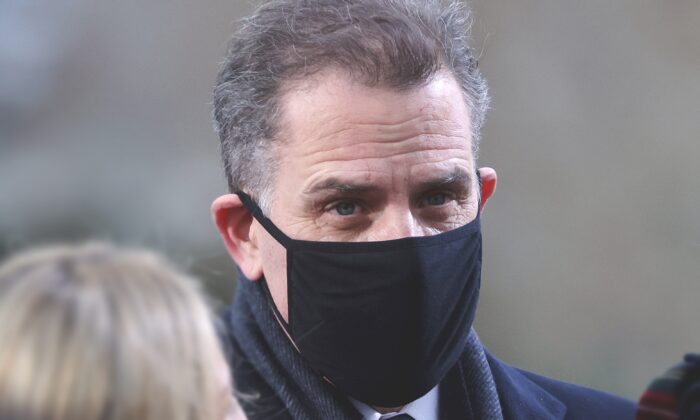 Hunter Biden attends his father Joe Biden's inauguration as the 46th President of the United States on the West Front of the U.S. Capitol in Washington on Jan. 20, 2021. (Jonathan Ernst/Pool/Reuters)
US News

A U.S. attorney issued a grand jury subpoena for the bank records of President Joe Biden’s son and brother in 2019, according to documents released to the public for the first time in January.

David Weiss, the U.S. attorney for the District of Delaware, passed the subpoena onto JP Morgan Chase Bank for the bank records of Hunter Biden, James Biden, and two other individuals, according to the set of papers.

The records requested corresponded to transactions between Chase and the Bank of China.

They were obtained by Marco Polo, a nonprofit started by Garrett Ziegler, who worked in the White House’s Office of Trade and Manufacturing Policy during the Trump administration.

Ziegler told The Epoch Times in an email that a whistleblower who was a party to the subpoena provided the documents.

“This wide-ranging grand jury subpoena confirms that Joe’s son and brother received transfers from an account with the Bank of China,” Ziegler said.

Wire transfers involving at least one Bank of China account were listed on a laptop computer that was said to be dropped off by Hunter Biden at a computer repair store in Delaware in 2019, “but it helps the public to see independent corroboration,” he added.

Archer, who has been convicted of conspiracy to commit fraud, and Hunter Biden founded an investment firm, Rosemont Seneca Partners, with Christopher Heinz in 2009 and went on to serve together on the board of Burisma, a Ukrainian energy company, while Joe Biden was vice president. All three have connections with Chinese nationals, including some linked to the Chinese Communist Party.

Matthew Schwartz, an attorney for Archer, said that his client was not aware of the 2019 subpoena.

“But Mr. Archer has cooperated completely with the Delaware U.S. Attorney’s Office investigation from the moment he became aware of it,” he told The Epoch Times via email.

A lawyer representing Hunter Biden and a White House spokesman did not respond to requests for comment. White House press secretary Jen Psaki was not asked about the document during a briefing on Jan. 31. Biden has said he’s confident his son did nothing wrong. A query sent to Schwerin’s company wasn’t returned.

Spokespersons for the U.S. attorney’s office and Chase did not dispute the authenticity of the documents but declined to comment.

Little is known about the federal investigation into Hunter Biden, which he described in late 2020 as dealing with “tax affairs” but was reportedly examining the younger Biden’s business dealings with China.

Shortly after Hunter Biden announced he was being probed, the U.S. attorney’s office said it could not comment on an ongoing investigation.

The new documents show that the investigation, which was shielded from the public until after the 2020 election, was likely going on in 2019.

“The question that remains is why Bill Barr directly intervened to ensure that the U.S. Attorney in Delaware’s investigation into Joe’s family was kept from the public for over 17 months until after the election, as previous reporting has confirmed. David Weiss and Bill Barr—or someone with a conscience inside the Justice Department—should answer that question for the American people,” Ziegler said.

Weiss, a Trump nominee, was one of the few U.S. attorneys not removed by Biden after taking office. Barr was attorney general for part of former President Donald Trump’s presidency.

Barr, asked about the matter shortly before leaving office, said a Department of Justice rule against publicly confirming probes that involve candidates for office was the reason behind keeping the investigation secret.