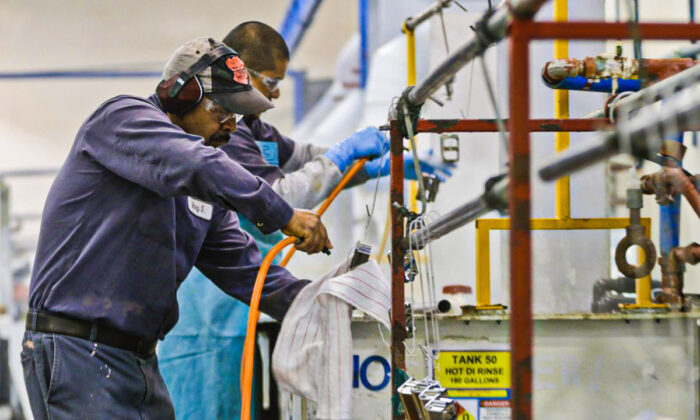 United States labor productivity tumbled in the first quarter, to its slowest rate since 1947, while unit labor costs soared, according to a U.S. Bureau of Labor Statistics report released June 2.

A surge in unit labor costs and hourly compensation in first quarter 2022 was reflected in a steep drop in productivity. Wages continued to make gains, a factor in causing inflation rates to further accelerate.

A nationwide worker shortage contributed to the boost in wage growth, with a reported 11.4 million job openings at the end of April.

Massive disruptions in the composition of the workforce, post-pandemic, have made it harder for government analysts to measure underlying productivity and labor growth, and have made the Federal Reserve’s current fight against inflation more difficult.

Non-farm productivity, which is a measurement of hourly output per worker, fell at a 7.3 percent annualized rate in the first quarter, an upward revision to the 7.5 percent decline that was estimated last month.

This was a steep downturn in productivity from the 6.3 percent growth rate in the fourth quarter of last year.

“This is the largest four-quarter decline since the fourth quarter of 1993, when the measure also declined 0.6 percent,” said the report.

Labor output per hour slumped by 2.3 percent in the first quarter, revised slightly from the initial estimate of 2.4 percent, while hours worked jumped by 5.4 percent, revised from 5.5 percent.

Meanwhile, unit labor costs, a key measure of wage inflation, were upwardly revised to 12.6 percent in the first quarter, from an initial estimate of 11.6 percent reported in May.

This followed a revised 3.9 percent expansion rate in labor unit costs for the fourth quarter of 2021.  The expansion rate was previously reported at 1 percent.

Over the past twelve months, labor costs have gone up 8.2 percent, instead of the 7.2 percent pace estimated last month, the largest four-quarter gain since the third quarter of 1982.

Many economists believe that the decline in productivity in the first quarter was largely due to the 1.5 percent drop in gross domestic product (GDP), which is mainly driven by an international trade deficit, supply chain problems, and rising inflation costs.

The current trends show an economy that is still recovering from the pandemic’s aftermath, with the labor market readjusting to higher inflation and new situations in the marketplace.