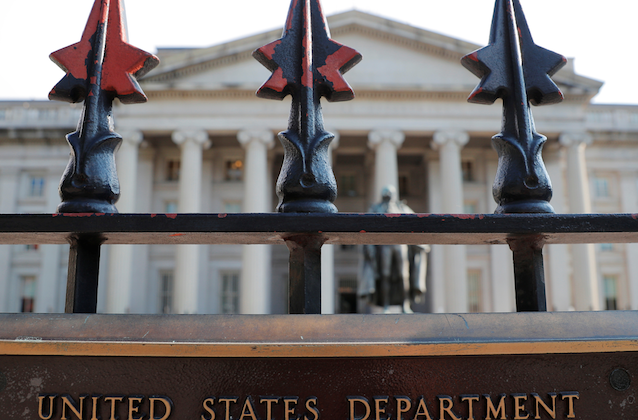 WASHINGTON—U.S. producer prices increased 0.2 percent in September, in line with expectations, while a revision to wholesale inventory estimates for August showed the biggest jump in nearly five years, beating forecasts.

A rise in services prices offset a slight drop in prices for goods, including a 3.5 percent drop in gasoline prices. Final demand prices had fallen 0.1 percent in August. In the 12 months through September, the producer price index rose 2.6 percent, slightly less than expected.

It was the first monthly rise in the producer price index since June. Yields on Treasury bonds rose to session highs while the dollar fell. U.S. stocks were trading lower.

Data on producer prices feed into inflation indicators watched by the Federal Reserve, which has been raising rates in hopes of keeping a price index based on personal consumption expenditures near the central bank’s 2 percent target.

The Fed raised rates last month for the third time this year and is expected to do so again in December.

Economists polled by Reuters had forecast the PPI increasing 0.2 percent in September and advancing 2.8 percent year-on-year.

The rise in wholesale inventories was slightly above the 0.8 percent expected by analysts. The component of inventories that feeds into estimates of gross domestic product growth rose 0.7 percent.

After declining inventories subtracted more than a percentage point from GDP growth in the April-June quarter, economists expect investments in inventories to support GDP going forward.

In the 12 months through September, the core PPI rose 2.9 percent, the same as the month before.

The cost of services rose 0.3 percent last month, reversing two months of declines, and driven by a 1.8 percent jump in transportation and warehousing services. Over one third of the increase in services was attributed to a 5.5 percent increase in the index for airline passenger services.

The index measures changes in margins received by wholesalers and retailers. Services had fallen 0.1 percent in August.

The report also hinted at the ongoing impact of the U.S. government’s trade policies. Prices for oilseeds fell 3.9 percent from August to September. Soybeans have been the target of trade actions by China in retaliation for U.S. imposed tariffs.

Prices for steel mill products were unchanged month over month, but have risen 18 percent since September 2017. The U.S. government imposed a 25 percent levy on imported steel in the spring.