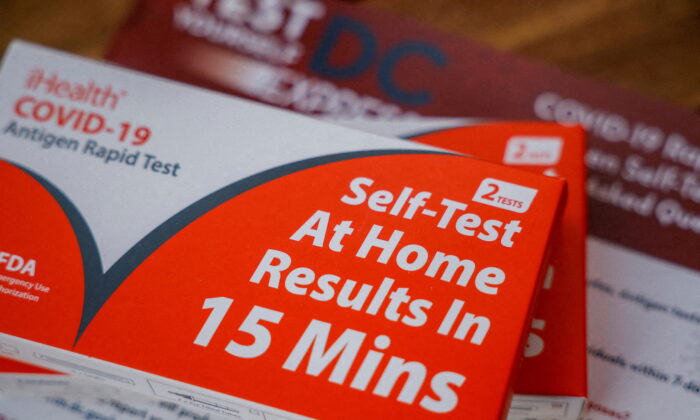 The U.S. government has procured an additional 100 million COVID-19 tests via iHealth Lab Inc. as part of the Biden administration’s plan to distribute millions of free at-home tests across the country.

“This effort supports the president’s plan to deliver 500 million free at-home COVID-19 tests to the nation in response to the Omicron variant,” the U.S. Department of Defense said in a statement on Friday. “The procurement was funded through the American Rescue Plan Act to supply critical medical resources to the nation,” it added.

The White House announced in a statement last month that President Joe Biden’s administration will mail out some 500 million COVID-19 tests, starting in January.

Americans can order the rapid tests through a new website: COVIDTests.gov—though with a limit of four tests per residential address. The tests will typically be shipped to households via the U.S. Postal Service (USPS) within 7 to 12 days of ordering them.

The batch of tests, paid for by taxpayers, is aimed at easing a shortage of tests across the country amid increased demand during the spread of Omicron, a variant of the CCP (Chinese Communist Party) virus that is able to easily bypass protection from COVID-19 vaccines while also being better at evading the protection from prior infection. The strain, however, causes much less severe cases of COVID-19.

A White House official said the government expects to pay some $4 billion to cover the first 500 million tests promised by Biden.

Meanwhile, additional federal test sites were also set up this month in relation to the plan, as a bid to help “states that need additional testing capacity,” according to the White House.

The increase in testing came after the Biden administration had already spent $130 billion from the American Rescue Plan to keep schools open, plus an additional $10 billion for testing at schools.

In mid-January, the president’s administration said it will up the number of COVID-19 tests it provides to schools to 5 million rapid tests and 5 million lab-based PCR tests every month.

Biden announced the new measure after facing criticism that his administration has mainly focused on getting people vaccinated, but hasn’t done enough to encourage mask-wearing and spur testing.