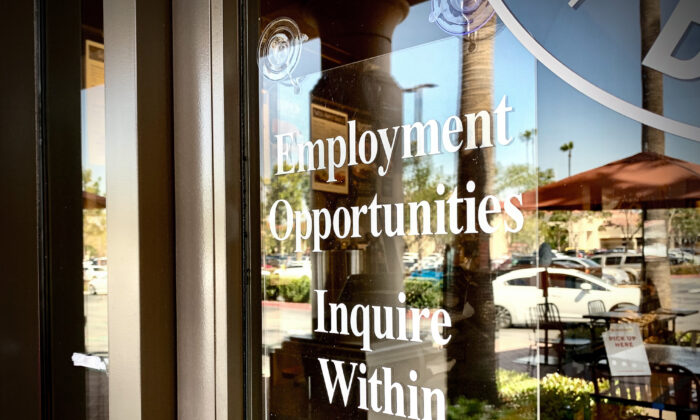 A sign displaying employment opportunities hangs near the doorway of a business in Irvine, Calif., on March 23, 2021. (John Fredricks/The Epoch Times)
Economy

Payroll processor ADP said in its closely watched jobs report that America’s private employers not only failed to add any jobs in January but payrolls actually dropped by more than 300,000 that month, teeing up what could be a disappointing jobs report when official government statistics are released on Feb. 4.

Private-sector employment in the United States fell by 301,000 in January, according to ADP’s Feb. 2 report.

“The labor market recovery took a step back at the start of 2022 due to the effect of the Omicron variant and its significant, though likely temporary, impact to job growth,” Nela Richardson, chief economist at ADP, said in a statement.

“The majority of industry sectors experienced job loss, marking the most recent decline since December 2020. Leisure and hospitality saw the largest setback after substantial gains in fourth quarter 2021, while small businesses were hit hardest by losses, erasing most of the job gains made in December 2021.”

The report delivered a downside surprise to analysts, with consensus forecasts expecting it to show an increase of 207,000 jobs.

While ADP reports don’t always align with official payroll numbers from the Bureau of Labor Statistics, due to be released on Feb. 4, they’re often looked to as a predictor of the government figures, which tend to move markets.

“We’ll see the same weakness when the govt release official January payrolls Friday,” Gary Black, Managing Partner at the Future Fund LLC, predicted in a tweet. He noted that analysts are expecting the BLS report to show that U.S. employers added 150,000 jobs in January, after adding 199,000 jobs in December.

The White House, meanwhile, is trying to get ahead of what could be a lackluster nonfarm payrolls report, apparently seeking to lower expectations for the closely watched number.

“We just wanted to prepare people to understand … what it is an assessment of and as a result, the month’s jobs report may show job losses in large part because workers were out sick from Omicron,” White House Press Secretary Jen Psaki said on Dec. 31.

Jared Bernstein, a member of President Joe Biden’s Council of Economic Advisers, told CNN on Dec. 31 that data collection issues with the January report could depress the payrolls number.

“It turns out that the peak of Omicron cases coincided with when the payroll data was being collected,” Bernstein said. “If you were not at work, if you were on unpaid leave, you’re not counted as being on payroll.”

“A spike in unpaid absentees will depress the monthly payroll count, again, even if none of those folks lost their jobs,” he said in a tweet.

But other labor market data have pointed to a softening in the jobs situation, with new weekly unemployment claims rising to nearly 300,000 in mid-January after falling to a 52-year low at the beginning of December.

Overall, around 18.8 million jobs have been recovered after the U.S. labor market hemorrhaged more than 22 million jobs in the pandemic’s opening months.

The unemployment rate has since declined to 3.9 percent, while the number of unemployed persons in the United States stands at 6.3 million.

In February 2020, prior to the COVID-19 outbreak, the unemployment rate was 3.5 percent, with 5.7 million Americans unemployed.