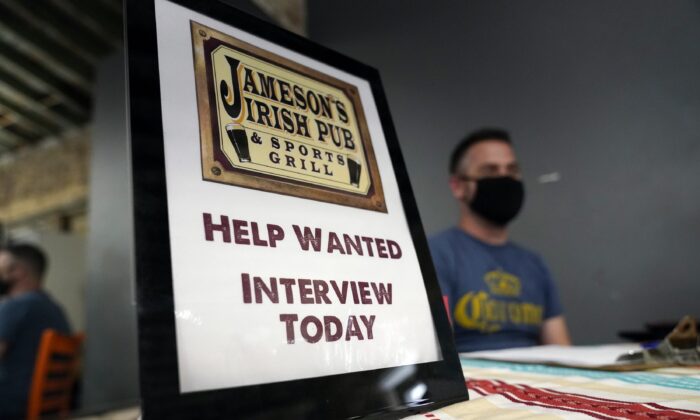 A hiring sign is shown at a booth for Jameson's Irish Pub during a job fair in Los Angeles in a file photograph. (Marcio Jose Sanchez/AP Photo)
Businesses in COVID-19

The New ADP National Employment Report indicates that private payrolls have increased by a higher degree than expected, despite Omicron concerns
By Nicholas Dolinger

These results come from the latest monthly ADP National Employment Report, which was released on Wednesday. The report relies on data gathered in mid-December, just as the Omicron wave of the CCP (Chinese Communist Party) virus was gaining momentum. While the report attests to people returning to work, it may fail to account for the full extent of disruptions occasioned by Omicron.

The ADP National Employment Report is somewhat overshadowed by the more comprehensive U.S. Bureau of Labor Statistics report, which is due to be released on Friday. The Labor Department’s monthly report is widely seen as more reliable and methodologically precise than the ADP’s, which is developed jointly with Moody’s Analytics.

The report also attests to a decline in first-time unemployment applicants from November to December, suggesting a slow return to normalcy for the labor market.

However, the economy remains troubled by labor shortages, which have become common since the dawn of the CCP virus pandemic in the United States. Last month, the CDC amended its longstanding recommendation for self-isolation for those infected with the CCP virus, stating that only five days of quarantine would be necessary as opposed to the previously required ten days. Dr. Anthony Fauci, chief medical adviser to President Joe Biden, attributed the change to economic necessity in an interview with CNN.

“The reason is that with the sheer volume of new cases that we are having and that we expect to continue with Omicron, one of the things we want to be careful of is that we don’t have so many people out,” said Fauci. “I mean, obviously if you have symptoms you should, but if you are asymptomatic and you are infected we want to get people back to jobs—particularly those with essential jobs to keep our society running smoothly.”

Still, with the rapid spread of the Omicron variant, labor shortages are likely to persist, with many essential employees temporarily unable to work while infected with the virus. For just one example, the New York City MTA has temporarily closed several subway lines, as the rapid wave of Omicron infections forces them to contend with a temporary labor deficit. Yet the recent ADP report suggests that, notwithstanding this temporary disruption in the labor market, there is a path to normalization of the labor market, as private payrolls surpass expectations in creating new jobs and bringing Americans back to work.