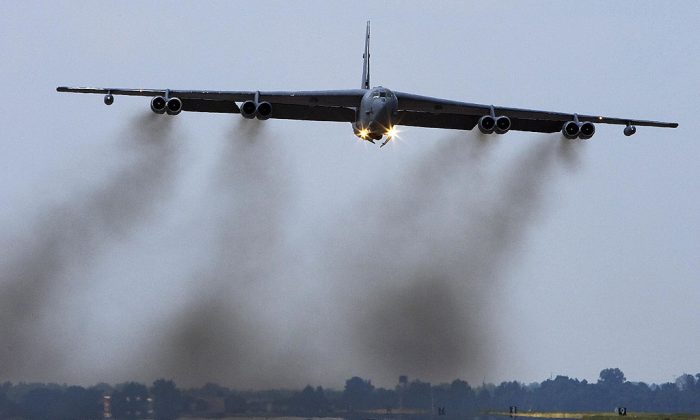 US Prepares B-52 Bombers for 24-Hour Alert Status

The United States is preparing to put B-52 bombers on 24-hour alert, a military footing not seen since the end of the Cold War.

The preparations were revealed by Air Force chief of staff Gen. David Goldfein in an interview with Defense One.

Goldfein stressed that the alert order had not been given, but that the Air Force was making preparations in anticipation that it might come.

During the Cold War, the massive nuclear-armed bombers were ready to leave at a moment’s notice, sitting on concrete pads at the end of an 11,000-foot runway at Barksdale Air Force Base in Louisiana.

Now Barksdale is being made ready once again for a 24-hour alert. An old concrete building where B-52 crews slept near the alert pads is being renovated, with beds being installed for more than 100 crew members, according to Defence One.

Despite growing concerns over North Korea’s nuclear missile programs, Goldfein would not say the B-52 preparations were being made in response to a specific threat.

“This is yet one more step in ensuring that we’re prepared,” he said.

“I look at it more as not planning for any specific event, but more for the reality of the global situation we find ourselves in and how we ensure we’re prepared going forward,” he told Defense One.

“The world is a dangerous place and we’ve got folks that are talking openly about use of nuclear weapons,” he said. “It’s no longer a bipolar world where it’s just us and the Soviet Union. We’ve got other players out there who have nuclear capability. It’s never been more important to make sure that we get this mission right.”

Goldstein said he had asked the Air Force Global Strike Command to lead the dialogue in discussing the nuclear threat. He said he had challenged them to consider key questions, such as, “What does conventional conflict look like with a nuclear element? Do we respond as a global force if that were to occur? What are the options? How do we think about deterrence in that environment?”

The B-52 aircraft are long-range strategic bombers capable of carrying 70,000 pounds of nuclear and conventional weapons, including bombs, smart weapons, mines, and missiles.

First flown in 1952, the B-52 was originally intended to drop nuclear gravity bombs on the Soviet Union. The development of missile technology soon rendered that approach obsolete, as the bomber would have been destroyed before reaching its target.

Despite its age, the B-52 has been deployed in virtually every major military conflict the United States has engaged in since the Gulf War, as a flying fortress capable of carrying huge firepower halfway around the globe.

The bomber can carry up to 20 cruise missiles with either conventional or nuclear warheads, which can be fired from hundreds of miles away.