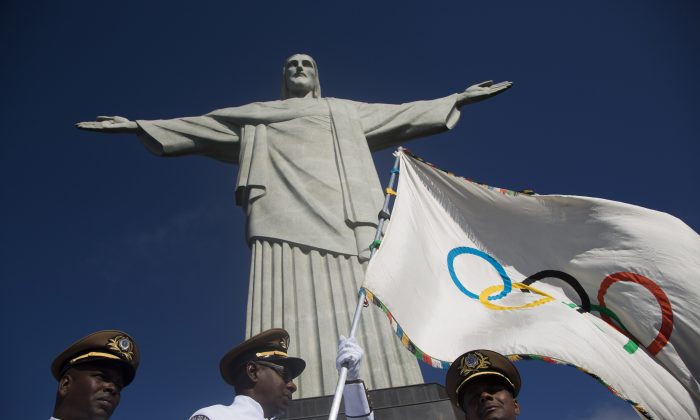 The newly arrived Olympic flag in front of the Christ the Redeemer statue in Rio de Janeiro, Brazil, on Aug. 19, 2012. In an attempt to limit ticket scalping, organizers of the 2016 Rio de Janeiro Olympics are putting large fines in place on tickets that might be resold after reaching the public through distribution by national Olympic committees. (AP Photo/Felipe Dana)
Soccer

US Prepared to Open Olympic Soccer Qualifying Vs Canada

KANSAS CITY, Kan.—Andi Herzog has come to understand the importance of the Olympics in the U.S., where national pride swells every four years regardless of the sport taking place.

That what makes the country’s recent history in soccer so disappointing.

The U.S. has missed out on two of the last three Summer Games, getting ousted by Mexico in the quarterfinals of qualifying for the 2004 Athens Games and failing to get out of group play four years ago, despite playing on home soil in an attempt to qualify for the 2012 London Games.

“I think for every athlete the Olympics is special,” said Herzog, coach of the under-23 team that will try to qualify for next year’s Rio Games beginning Thursday night in Kansas City.

First up for the Americans is Canada, followed Saturday night by Cuba. They’ll head to Commerce City, Colorado, next week to wrap up Group A play against Panama.

The top two teams from each group advance to the semifinals Oct. 13 in Utah, where the winners earn automatic berths to the Rio Games. The winner of the third-place game remains alive, too, but must beat Colombia in a one-game playoff for the final Olympic selection.

“We know the last squad didn’t qualify, so we have to do a good job right from the start,” Herzog said before a final practice Wednesday at Sporting Park. “But overall, we’re optimistic and we have enough confidence to say our goal is to qualify.”

Most of the players Herzog selected for his roster participated in a training camp in England, where the U.S. lost 1–0 to England and beat Qatar 2–0 in a pair of tuneup matches. Six of them also helped the under-20 World Cup squad advance to the quarterfinals in June.

Perhaps the most intriguing name is Gedion Zelalem, the talented German-born midfielder who in the past year became a U.S. citizen. The 18-year-old has been on loan from Arsenal of the Premier League to Scotland’s Glasgow Rangers, where he has been starting regularly.

Seventeen-year-old Cameron Carter-Vickers, a defender for Tottenham, and midfielder Emerson Hyndman of Fulham also have joined the squad from the Premier League.

Among the notable absences is Julian Green, who scored against Belgium in the World Cup. Herzog said that Green was busy with Bayern Munich during his squad’s training camp, and that so much ground was covered that he chose to go primarily with players who were in attendance.

Making things even more challenging is that talented goalkeeper Ethan Horvath won’t join the squad until its third game, which falls in the FIFA window, because he’s been be busy with Norwegian club Molde. Zack Steffen will start the two games in Kansas City.

Not that Herzog is using his roster problems as an excuse. He is confident that the team he’s chosen for Olympic qualifying is up to the task, even if previous ones have fallen short.

“We’ve already had a couple of days of training,” Herzog said, “the boys look really sharp and in good shape, so I’m really optimistic to qualify for Rio next year.”