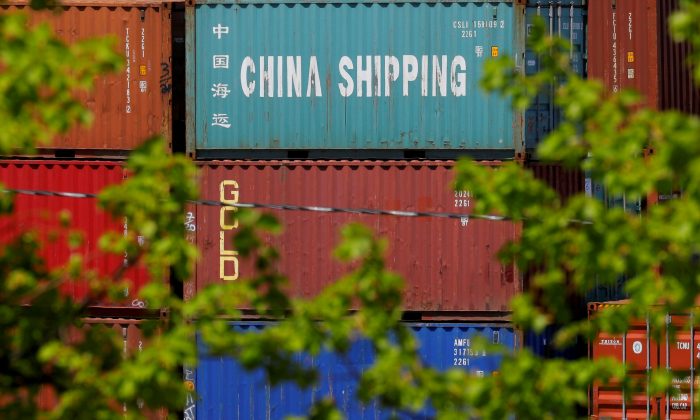 Shipping containers, including one labelled "China Shipping," are stacked at the Paul W. Conley Container Terminal in Boston, Mass., on May 9, 2018. (Brian Snyder/Reuters)
Economy

US Posts Record Trade Deficit in 2021

WASHINGTON—The U.S. trade deficit surged to a record high in 2021 as imports increased sharply amid the restocking of shelves by businesses to meet robust domestic demand.

The Commerce Department said on Tuesday that the trade deficit increased 27.0 percent last year to an all-time high of $859.1 billion. The deficit was at $676.7 billion in 2020.

“The US trade picture won’t return to normal until the pandemic purchases start to slow and life returns to what it was,” said Christopher Rupkey, chief economist at FWDBONDS in New York.

The trade gap represented 3.7 percent of gross domestic product, up from 3.2 percent in 2020. The economy grew 5.7 percent in 2021, the strongest since 1984, after the government provided nearly $6 trillion in pandemic relief, which fueled consumer spending on goods.

The goods deficit shot up 18.3 percent to a record $1.1 trillion last year. Imports of goods hit an all-time high of $1.8 trillion. They were driven by imports of industrial supplies and materials, which increased to their highest level since 2014.

Food imports were the highest on record as were those of capital, consumer, and other goods. There were record imports from 70 countries in 2021, led by Mexico, Canada, and Germany.

Robust import growth overshadowed a sharp rebound in exports. Goods exports surged 23.3 percent to a record $1.8 trillion. Exports of industrial supplies and materials, foods, consumer goods, other goods, and petroleum were the highest on record.

The United States logged record exports to 57 countries last year, led by led by Mexico, which increased to $276.5 billion. Shipments to China rose to $151.1 billion, while exports to South Korea increased to $65.8 billion.

The final boost to the trade deficit came from a 1.8 percent increase to $80.7 billion in December. Economists polled by Reuters had forecast an $83.0 billion deficit.