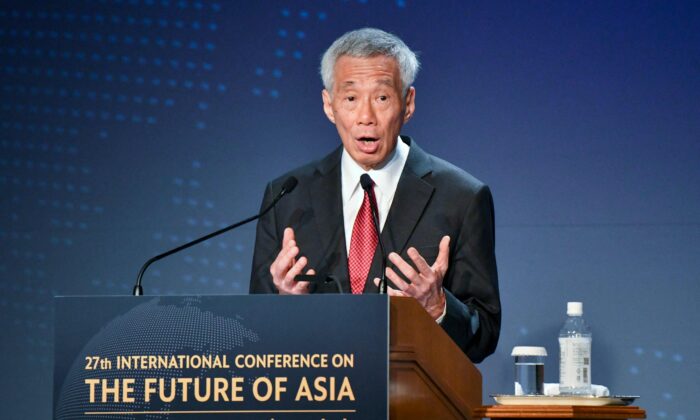 Singapore Prime Minister Lee Hsien Loong delivers a speech as part of the 27th International Conference on The Future of Asia in Tokyo, Japan, on May 26, 2022. (Kazuhiro Nogi/AFP via Getty Images)
Asia & Pacific

US Plays ‘Essential Role’ in Ensuring Peace and Stability in Asia: Singapore PM

The United States still plays an irreplaceable role in ensuring peace and stability in Asia, but most Asian countries prefer not to choose sides, Singapore Prime Minister Lee Hsien Loong said at a regional annual conference in Tokyo, Japan.

At the “Future of Asia” conference organized by Nikkei and the Japan Center for Economic Research on May 26, Lee’s speech focused on regional security and economic cooperation.

In his speech, Lee said he believes that the United States is pivotal to regional security in Asia.

Since the end of World War II, the United States “has provided the framework for peace and stability,” Lee said. “Even as the strategic balance shifts, the U.S. still retains this essential role, which no other country can take over.”

But to ensure stability and security, Lee said that actions are needed to “minimise the risk of tensions worsening into hostilities” between the United States and China.

He urged for a regional balance of power between Asian countries themselves, but also with others like the United States, the European Union, Australia, and the United Kingdom.

He also indicated his belief that security in the region needs to be approached not just from the perspective of one individual nation, as doing so may lead to an arms race. Nations should work together to strengthen their collective security, he said.

He also called for cooperation “beyond forming alliances and formal groupings of like-minded partners, like the Quad or the AUKUS group,” as engagement and confidence and trust building arrangements with potential adversaries will be needed to “reduce mistrust, clarify misunderstandings, and manage acute incidents, which are bound to arise from time to time.”

“[T]he stakes are high, and countries must be willing to show restraint, accept differences, and live with compromises. Because if these flashpoints are mishandled, a miscalculation or mishap could well trigger an escalation and serious consequences.”

Engagement within Asia and with the rest of the world should not just be based on security considerations, Lee continued.

Lee said Singapore joined the U.S.-led Indo-Pacific Economic Framework (IPEF) because it was “forward-looking” and “demonstrates that the Biden Administration values its partners in Asia, and appreciates the importance of engaging them through economic diplomacy.”

Of the 10 member states of the Association of Southeast Asian Nations (ASEAN), seven have joined the IPEF. The three ASEAN states not in the framework are Laos, Burma (also known as Myanmar), and Cambodia.

Lee said regional security and economic schemes should be open and inclusive, such as the Regional Comprehensive Economic Partnership (RCEP) initiated by ASEAN, which includes China as well as Japan, South Korea, Australia, and New Zealand, but not the United States.

“It is far better that China’s economy be integrated into the region, than for it to operate on its own, by a different set of rules,” he said.

According to a study released on April 25 that analyzed China’s influence across the world, it was noted that Singapore had became “visibly quieter over the South China Sea dispute and international rule of law relating to the PRC” after the detention of Singapore’s armoured vehicles in Hong Kong in 2016-2017.

The BRI has been described as a “debt trap” for developing countries.