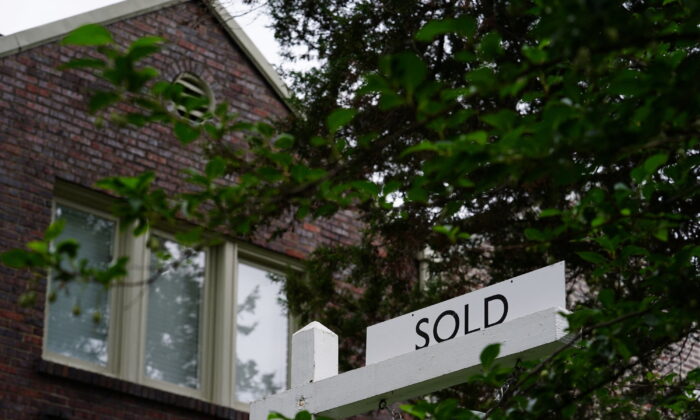 A "sold" sign outside of a recently purchased home in Washington on July 7, 2022. (Sarah Silbiger/Reuters)
Economy

The National Association of Realtors (NAR) said on Wednesday its Pending Home Sales Index, based on signed contracts, tumbled 8.6 percent to 91.0 last month. Contracts declined in all four regions.

Economists polled by Reuters had forecast contracts, which become sales after a month or two, declining 1.5 percent. Pending home sales plunged 20.0 percent in June on a year-on-year basis.

The contract rate on a 30-year fixed-rate mortgage is averaging 5.54 percent, according to data from mortgage finance agency Freddie Mac. The rate has risen more than 200 basis points since January as inflation soared and the Federal Reserve aggressively tightened monetary policy.

The U.S. central bank raised its policy rate by another 75 basis points on Wednesday. That brought the total interest rate hikes since March to 225 basis points.

The housing market is one of the sectors most sensitive to interest rates. Data last week showed sales of previously owned homes fell for a fifth straight month in June, and housing starts and building permits also declined further last month. However, a collapse is unlikely because of a severe housing shortage.

Softening demand could, however, help bring housing supply and demand back into alignment and slow price growth. House prices maintained their double-digit growth on an annual basis in May, reports showed on Tuesday.