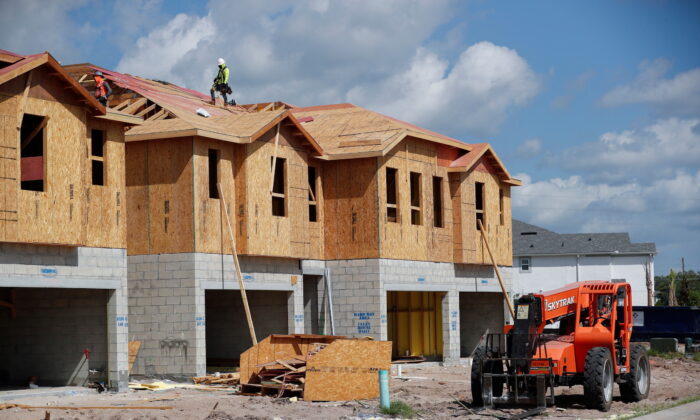 New townhomes are seen under construction while building material supplies are in high demand in Tampa, Florida, on May 5, 2021. (Octavio Jones/Reuters)
Economy

WASHINGTON—Contracts to buy U.S. previously owned homes dropped to the lowest level in nearly two years in February, weighed down by a persistent shortage of properties, and activity could remain sluggish amid increasing mortgage rates and high house prices.

The National Association of Realtors (NAR) said on Friday its Pending Home Sales Index, based on signed contracts, fell 4.1 percent last month to 104.9, the lowest level since May 2020. It was the fourth straight monthly decline in the index, which leads sales by a month or two.

“A lack of supply that is showing few signs of easing is boosting prices and impacting affordability,” said Rubeela Farooqi, chief U.S. economist at High Frequency Economics in White Plains, New York. “Further increases in mortgage rates as the Fed hikes and starts balance sheet reduction will be an additional constraint for sales going forward.”

Sales of previously owned homes tumbled in February, but remained above their pre-pandemic level. The inventory of used houses is at record lows. Shortages and expensive building materials have made it harder for builders to ramp up construction, leading to double-digit growth in houses prices.

Mortgage rates surged in February and have continued to push higher after the Federal Reserve last week raised its policy interest rate by 25 basis points, the first hike in more than three years. They are likely to continue accelerating as Fed Chair Jerome Powell on Monday said the U.S. central bank must move “expeditiously” to raise rates and possibly “more aggressively” to keep high inflation from becoming entrenched.

The 30-year fixed rate averaged 4.42 percent this week, the highest since January 2019, from 4.16 percent in the prior week, data from mortgage finance agency Freddie Mac showed on Thursday.

According to the NAR, higher mortgage rates and sustained house price inflation had resulted in a 28 percent year-over-year jump in mortgage payments as of February.

Other data on Friday confirmed that consumer sentiment wobbled in March as gasoline prices surged to a record high in the wake of Russia’s war against Ukraine, lifting one-year inflation expectations to the highest level since 1981.

The University of Michigan’s final consumer sentiment index dropped to 59.4 in March, the lowest reading since August 2011. It was slightly revised down from the preliminary reading of 59.7 earlier in the month. The index was at 62.8 in February and it has now declined for three straight months.

Some economists viewed the modest revision from early this month as a sign that the worst was over and that ebb in sentiment could be coming to an end.

The survey places more emphasis on gasoline prices and the stock market. The Conference Board’s consumer confidence index, which puts more weight on the labor market, remains well above its COVID-19 pandemic lows.

Gasoline prices appear to be stabilizing after setting a record high of $4.331 per gallon on March 11. Prices averaged $4.243 per gallon on Friday, according to AAA.

Economists maintained that the continued slump in the University of Michigan’s sentiment index was overdone relative to fundamentals and they expected the economy to continue growing. First-time applications for unemployment benefits are at a 52.5 year low and wages are rising at a strong clip.

There were 11.3 million job openings at the end of January. Consumers have accumulated more than $2 trillion in excess savings, which should help to cushion the blow from high inflation. The share of consumers planning to buy motor vehicles increased compared to February, while intentions to purchase major household items rose modestly. Home buying plans fell.

“The continuing weakness in confidence does not warrant any immediate change to our near-term forecast for consumer spending as the relationship between spending and sentiment is loose,” said Scott Hoyt, a senior economist at Moody’s Analytics in West Chester, Pennsylvania.