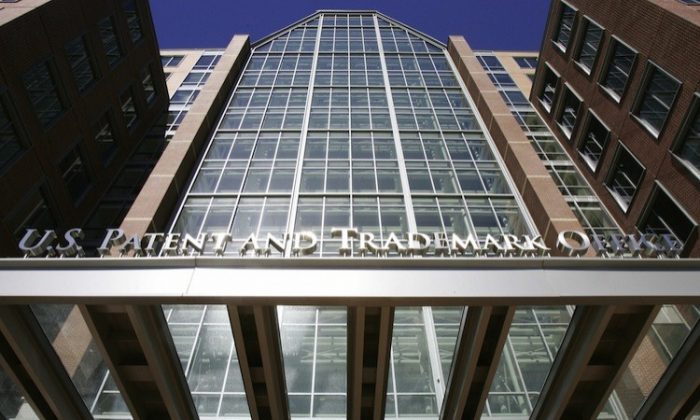 The U.S. Patent and Trademark Office is seen in Alexandria, Va., on March 14, 2006. (Paul J. Richards/AFP/Getty Images)
US Features

Unlike USPTO personnel, it’s not clear whether federal contractors go through the same background checks that federal employees go through, according to inventor David Hoyle, who has researched the subject extensively.

Even so, the patent office often gives these contractors access to the Patent Application Locating and Monitoring Database (PALM), a computer system that plays a crucial role in tracking inventions.

According to former patent office quality assurance specialist Julie Burke, USPTO’s databases, including PALM, are loaded with sensitive information. Patents under review are potentially worth millions of dollars.

One key for accessing the system is the job title of supervisory patent examiner (SPE). In 2020, the USPTO had at least 120 people who weren’t SPEs designated online as SPEs on its employee locator. All SPEs must be an examiner on a patent, but an examination of patent office records shows that these people have never done so, Hoyle said. In all, more than 100 of them are federal contractors.

According to Burke, the USPTO has designated non-SPEs as SPEs for a long time. In 1995, when she first joined the office, work was regularly being assigned by a patent examiner rather than an SPE in some technology centers, she said. Labeling people who aren’t SPEs as SPES also creates problems when inventors, patent attorneys, and patent agents call the patent office for help.

“You go into a court of law and the gal sitting behind the bench is the judge,” Burke said. “What if she’s really just the paralegal of the week who they said, ‘Oh, you go up there and act as a judge, and we’ll call you a judge.’”

At one point, Burke was listed as an SPE, although she was a quality assurance specialist. In 2011, Burke asked patent office management to change her status on the USPTO’s website, but they didn’t act. When she left the office in 2015, she was still an SPE on the website.

“I also saw other quality assurance specialists given this wrong title, and I saw contract employees that are not even federal workers with the title,” Burke said.

To become an SPE, someone must be a federal employee with at least a year of specialized experience at the second-highest level of the federal pay scale, according to a USPTO spokesman. The person must also pass background checks.

An SPE must understand the meaning behind a technical-term-riddled patent application and perform the proper actions with it, she said. Each SPE leads and supervises a group of patent examiners, who evaluate patent applications and decide when to give inventors a patent.

SPEs assign work, hire, fire, and promote employees, and give end-of-the-year evaluations to patent examiners, according to Burke. SPEs in the Licensing and Review Department work with the Department of Defense to ensure patents valuable to national security remain secret.

Patent office employees in the technology centers who have access to both published and nonpublished patents must file financial disclosure ethics forms, she said. For instance, when she worked on biotechnology patents, she wasn’t allowed to buy stocks in biotech companies.

The USPTO’s rulebook provides a loophole that allows SPEs to make virtually any employee into an SPE without ever earning these qualifications.

“The titles ‘supervisory patent examiner’ and ‘primary examiner’ … include in their definition any person designated by them to act on their behalf. It’s recognized that the authority to accept or refuse the transfer of an application may be delegated when such authority is deserved,” section 903.08 of the Manual of Patent Examining Procedure reads.

According to experts, this loophole bypasses federal rules.

SPE can’t be a mere administrative title, Burke said. According to the federal Office of Personnel Management (OPM), the designation of “supervisor” holds significant weight in the federal employment code. Only supervisors or acting supervisors should do supervisory work. Acting supervisors are formally appointed by group directors until a replacement supervisor is formally hired.

A supervisor is a “position or employee that accomplishes work through the direction of other people and meets at least the minimum requirements for coverage under this Guide,” according to the OPM.

According to Eric Pines, a federal employment attorney, the USPTO rulebook bypasses federal laws about how government employment works. The Federal Labor Relations Authority is supposed to determine whether someone can be designated as a supervisor based on what they do. Someone can’t just be relabeled as a supervisor.

“The USPTO’s allowing supervisors to create supervisors without first following the Merit System Principles that Congress has put in place to protect the integrity of the federal labor force could lead to great inequities as it relates to promotion, selection and seniority rights,” Pines told The Epoch Times in an email.

If the USPTO calls an unqualified person an SPE, it’s a misuse of an official federal title, he wrote. Simply designating people as SPEs bypasses a system designed to make sure that only qualified people get supervisor privileges.

“This appears to be an end run around proper federal employee checks and balances that are put in place to avoid the exact thing that is occurring in this case. The system as it is laid out in the MPEP [Manual of Patent Examining Procedure] clearly opens the door to abuse and inequity,” Pines wrote.

Moreover, the USPTO might not have the same restraints on federal contractors with questionable SPE titles, Burke said.

The important information that SPEs see and the decisions the patent examiners make are inside the USPTO’s electronic databases, she said.

When the USPTO receives a patent application, it usually keeps the details of the invention secret from the public for 18 months, according to Burke. But those details still exist on its internal databases.

Anyone with an SPE title can see them, she said. If a high-level database access is a treasure chest, the title of ‘SPE’ is the key that opens it.

“If you have that SPE beside your name in PALM, you’re able to do things in patent applications that other people at the office are not allowed to do. It’s like a governor or a control switch. It’s hard-baked into the way they’ve got this all set up,” she said.

PALM works based on a user’s status in the system. If someone is identified to PALM as an SPE, the system will give them at least some SPE-level access.

This designation could cause problems, said Lorraine Spector, a former SPE who left the USPTO in 2019.

“If it gave them the ability to change records and things like that, it might cause issues,” she said.

Spector said she didn’t know just what an SPE designation allowed people to do inside the PALM system. It’s possible the USPTO’s title only gave contractors partial access.

However, it’s unlikely contractors could use an SPE designation for insider trading, according to Spector. Although doing so would be theoretically possible, they would have to know what patent they were looking for.

“Imagine you’re a contractor,” she said. “You have no way of knowing it exists.”

Some of the 120 people listed as SPEs on the USPTO website but who may not actually be SPEs are long-term patent office employees.

Several members of this group told The Epoch Times that they weren’t currently SPEs. Some were former SPEs. But they all said they didn’t know exactly why they were marked as SPEs.

“It’s done that way, I guess, for administrative purposes,” said Bennett Celsa, a current USPTO employee who works as a patent examiner.

According to a USPTO spokesman, non-SPEs are listed as SPEs in directories for administrative reasons.

“Occasionally, non-SPEs are identified as SPEs in an agency directory,” the spokesman said. “That’s intentional, because the jobs of those employees require access to certain data in systems that employ role-based access protocols. Only those whose job duties require access are granted access to the necessary data.”

A person would have to have at least three years of employment with the U.S. government to reach the qualification for the SPE title, yet all of the questionable SPEs are contractors for Akima, a company that supplies the federal government with office managers. The USPTO told The Epoch Times that contractors aren’t eligible to be SPEs.

Another person listed as an SPE was NiaBari Maeba. She was also an Akima office manager who was contracted to work at the patent office. According to her LinkedIn page, she never actually worked directly for the USPTO.

The Epoch Times reached out to both Maeba and Diriba on LinkedIn, but neither agreed to an interview. Other contractors listed as SPEs didn’t reply to requests for comment.

Some of the questionable SPEs are in parts of the patent office that don’t normally need SPEs.

But the strangest SPE at the USPTO might not even be a human being. Screenshots Burke provided show that a computer program called “Central Docket” has an SPE title on the USPTO website.

Central Docket has 281,712 cases on its list to review, she said. But the average patent examiner usually has fewer than 200 cases on his list.

Central Docket appears to be a digital creation, not a person employed by the USPTO, according to Burke.

At least one patent case suggests a purpose for Central Docket, she said.

As of today, Torques Tubes and Manufacturing Methods Thereof has waited five years without being processed by a patent examiner. But anyone looking at the computer system between 2018 and 2020 would see that the case had been assigned to an examiner named Central Docket recently, Burke said.

“By repeatedly re-docketing this case to themselves, it looks like it is a fresh new case which is going to be examined soon,” she said. “And when USPTO actually examines this case, the reports they run will have it look like there has been no delay, since it will probably be picked up for examination within a couple months of its last docket date.”

Several other cases have a similar pattern.

An email chain provided by Hoyle shows that in 2014, several USPTO employees agreed to change files so that 200 cases didn’t appear to go beyond an official limit.

“As per our conversation, you have indicated that you can help us to adjust/reset the Hyatt cases workflow so that they will not appear as ceiling exceeded cases. Attached is a list of the ceiling exceeded Hyatt cases as per your request,” USPTO employee Jason Chan wrote.

In effect, this change would hide the fact that the USPTO was behind on processing cases by removing the cases from lists.

“If we remove from ceiling list and do not start a clock the cases will be stuck in nowhere land not on any docket,” USPTO employee Roy Elkins wrote.

USPTO employee Marc Springer responded, “I think that was the idea Roy.”

Chan, Elkins, and Springer didn’t respond to requests for comment.