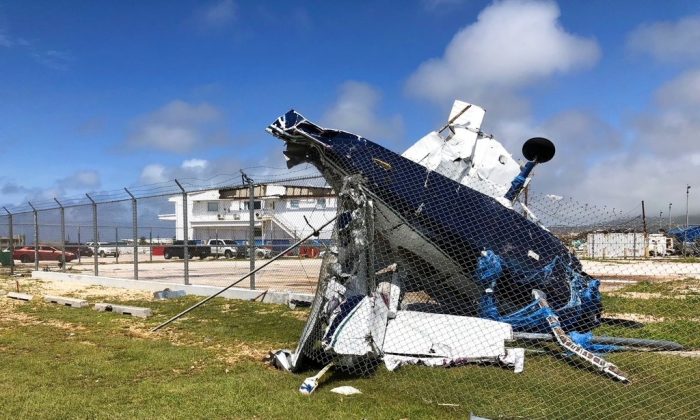 A damaged plane sits at the airport after Super Typhoon Yutu hit the U.S. Commonwealth of the Northern Mariana Islands, Oct. 26, 2018, in Garapan, Saipan. (AP Photo/Dean Sensui)
Crime and Incidents

US Pacific Territory Will Need Help With Typhoon Recovery

Residents of a U.S. territory in the Pacific ravaged by Super Typhoon Yutu are hopeful for help from the federal government as they dig out from damage including crumbled concrete houses, smashed cars, and fallen utility poles.

Used to riding out monster homes, about 50,000 people living in the U.S. Commonwealth of the Northern Mariana Islands expect to be without electricity and running water for months after getting slammed by the strongest storm to hit the U.S. this year.

Officials toured villages in Saipan and saw cars crushed under a collapsed garage, the ground ripped clean of vegetation and people injured by spraying glass, and other debris. As of Oct. 26 local time, there was one storm-related death confirmed.

The agency had already significant water and food in place because it had stored more than 220,000 liters of water and 260,000 shelf-stable meals at a distribution center on nearby Guam to prepare for Typhoon Mangkhut, which struck last month.

Mangkhut’s effects turned out to be not as bad as expected, so those supplies are still available.

One change the agency adopted because of Hurricane Maria, a Category 5 storm that struck Puerto Rico last year, is it has created task forces to tackle different areas such as transportation, communications, food and water, and energy and fuel.

Federal and territory officials are in constant communication to address each of these areas, he said.

“We want people to remember we are Americans and we exist,” local lawmaker Edwin Propst said.

Maximum sustained winds of 180 mph (290 kph) were recorded around the eye of the storm, which passed over the islands of Tinian and Saipan early Oct. 25, the National Weather Service said.

A 44-year-old woman taking shelter in an abandoned building died when it collapsed in the storm, the governor’s office Facebook page said. Officials couldn’t immediately be reached for additional details.

The territory’s only hospital in Saipan, the most populated island, said it received 133 people in the emergency room on Oct. 25, and three patients had severe injuries that needed surgery.

Residents “were stoic and still smiling and they were just thankful to be alive,” said Propst, a member of the territory’s House of Representatives.

Sablan said most of the structures in the southern part of Saipan lost their roofs and many, including a high school, were “completely destroyed.”

“This damage is just horrendous, it’s going to take months and months for us to recover,” he said by phone.

Even the plants were torn up, he said: “There are no shrubs, they’re all gone. There are no leaves.”

On the smaller island of Tinian, which took a direct hit, most of the houses were destroyed, and even some concrete ones were reduced to rubble, resident Juanita Mendiola said.

“We had to hide inside the bathroom because the house felt like it was going to blow apart,” she said. “It was literally shaking — a concrete house shaking.”

The storm ripped a door of its hinges and flung it more than 100 feet away into a pigsty, she said.

More than 800 people were in shelters across the territory, and space was running out, officials said. Electricity and running water shut down on Oct. 24, residents said. Cellphone coverage was spotty.

Nadine Deleon Guerrero, a spokeswoman for the territory’s emergency management department, said all of Saipan (population 50,000) and Tinian (population 3,000) islands were without utility power.

Crews were still assessing how long it will take to restore electricity, she said.

Commercial flights won’t be operable for some time, she said. Terminals, the tarmac, runway, and equipment all suffered damage.

The Saipan hospital was running on backup generators but otherwise operating normally, said Esther Lizama Muna, CEO of the Commonwealth Healthcare Corp. She said she expects more patients to seek medical help on Oct. 26 and worried they could run out of medical supplies.

“From my experience with previous typhoons, people tend to wait to care for their health as they focus on their homes and others,” Muna said. “So we do expect more injuries trickling in.”

A health center on Tinian sustained damage but was operating normally.

The islands’ emergency management agency said it was trying to clear roadways so first responders could help residents who lost their homes, get people medical care, and head to shelters.

“At its peak, it felt like many trains running constant,” Saipan resident Glen Hunter wrote in a Facebook message. “At its peak, the wind was constant and the sound horrifying.”

Hunter said he doesn’t expect to get power back for months, recalling how it took four months to restore electricity after Typhoon Soudelor in 2015.

Recovery efforts on Saipan and Tinian will be slow, said Brandon Aydlett, a meteorologist with the National Weather Service.

“This is the worst-case scenario. This is why the building codes in the Marianas are so tough,” he said. “This is going to be the storm which sets the scale for which future storms are compared to.”

Propst, the lawmaker, said he has lived through dozens of typhoons, but “this is the first time I feared for my life.”

He, his wife and their four children huddled in a bedroom as the storm ripped storm shutters from the windows of his concrete home, shattered a glass sliding door, and flooded the floors.

Some poor families can’t afford homes that conform to building codes, Propst said. Some build houses with concrete foundations and walls but that have wooden and tin roofs.

Amber Alberts said she was feeling like “one of the lucky ones” after safely riding out the storm in the kitchen of her apartment. “My place is fine, my car is fine,” she said on Oct. 26 as she set out to find ways to help.