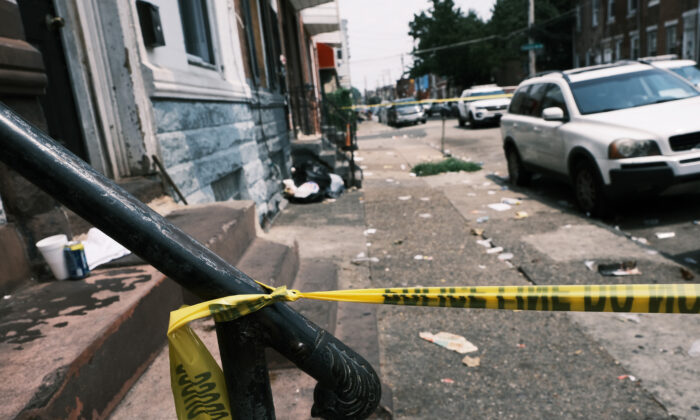 Police tape blocks a street where a person was shot in a drug related event in Philadelphia, Pa., on July 19, 2021. (Spencer Platt/Getty Images)
US News

Overdose deaths in the United States have reached new highs, peaking at over 107,000 in 2021, according to data published by the U.S. Centers for Disease Control and Prevention (CDC), amid increased usage of fentanyl and methamphetamine.

“The net effect is that we have many more people, including those who use drugs occasionally and even adolescents, exposed to these potent substances that can cause someone to overdose even with a relatively small exposure,” Volkow said in a statement.

Deaths spiked the most in Alaska, where overdose fatalities increased by 75 percent from 2020 to 2021, the data show. In Hawaii, meanwhile, overdose deaths fell by about 2 percent.

Analysts have said that COVID-19 lockdowns and other restrictions are partially to blame as they isolate individuals from their families and friends. People with drug problems also had a more difficult time seeing treatment amid the lockdowns and restrictions.

However, some experts have noted that overdoses have been steadily increasing every single year. However, in recent years, fentanyl, which is often reportedly imported via Mexican cartels from China, has triggered the recent spike in deaths.

Earlier this year, Drug Enforcement Administration (DEA) issued a warning about a surge of fentanyl overdoses and mass overdose events. Fentanyl, which is sometimes cut into other drugs, is estimated to be upwards of 100 times more potent than morphine, another opioid.