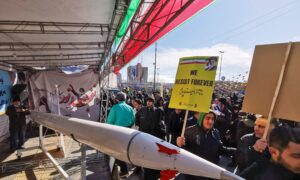 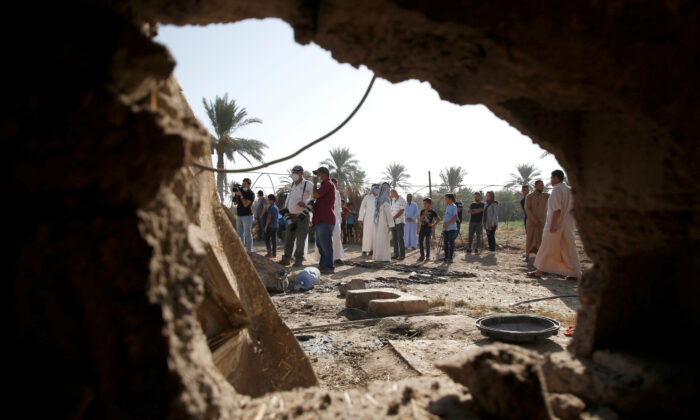 People are seen through a hole of a house damaged by a rocket attack in the Abu Ghraib district, on the outskirts of Baghdad, Iraq, on Sept. 29, 2020. (Saba Kareem/Reuters)
Middle East

The State Department said on Sept. 29 that the United States is “outraged” by Monday’s rocket attack in Baghdad, Iraq, that killed six Iraqi civilians, and called on the Iraqi government to take action against those responsible.

The six Iraqi civilians—all women and children—were killed when two militia rockets struck a family home Monday in Baghdad’s Radwaniyah neighborhood. The Iraqi capital’s international airport, which is nearby, was the intended target, security officials believe.

The attack came as the United States threatened the closure of its embassy in the city unless Prime Minister Mustafa al-Kadhimi’s administration reins in Iran-backed armed groups responsible for frequent rocket fire and roadside bomb attacks targeting American personnel in the country.

“We are outraged by yesterday’s rocket attack in Baghdad that killed civilians, including a mother and her children,” State Department spokeswoman Morgan Ortagus said in a statement. “We express our condolences to the innocent Iraqi people and their families who were victims, once again, of these ruthless acts of violence.”

Responding to warnings from the United States that it could close its embassy in Baghdad, a spokesman for the prime minister said Tuesday that it would have “disastrous repercussions” for the region.

“The withdrawal or closure of any diplomatic mission of any country will have disastrous repercussions for the entire region,” spokesman Ahmed Mulla Talal said.

He said the al-Kadhimi administration rejected any attempts to turn Iraq into an arena of conflict between the United States and Iran.

The attacks have not let up, despite the warnings from the United States.

No group has claimed responsibility for the attack, however U.S. officials said Shiite extremists aligned with Iran are responsible. The group previously has targeted Baghdad’s international airport and the U.S. Embassy in the city’s heavily fortified international Green Zone.

A child was injured in July after a rocket fired toward the embassy landed near a house.

According to AFP, there have been roughly 39 rocket and bomb attacks in Iraq targeting the U.S. presence—almost the same figure as attacks between October 2019 and July 2020.

Iran-backed extremists have ramped up their rocket attacks this year following the U.S.-approved drone strike of Iranian commander Qassem Soleimani, who was accused of killing hundreds of American troops over the years. Iran then fired a barrage of about two-dozen rockets, hitting two military bases housing American soldiers in Iraq.

Days before the Soleimani airstrike, Iran-backed extremist groups were seen attempting to enter the U.S. Embassy, setting one structure on fire.

“The Iraqi people deserve to live in safety and security, so we call on Iraqi officials to take immediate action to hold the perpetrators accountable,” Ortagus added. “We have made the point before that the actions of lawless Iran-backed militias remains the single biggest deterrent to stability in Iraq.”

“These militias pose an unacceptable danger to everyone in Iraq, from diplomatic officials and facilities to Iraqi activists and families.”