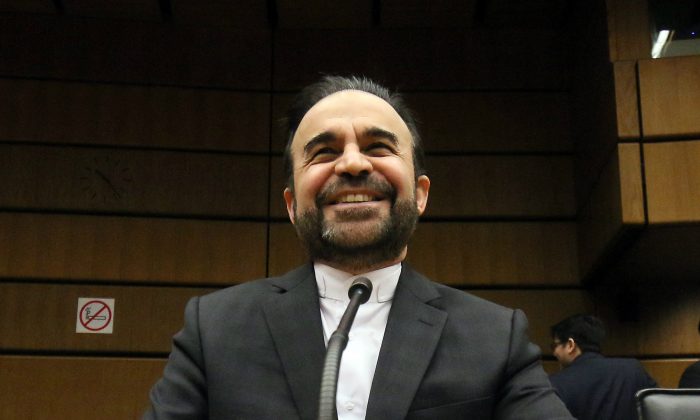 US, Other Powers Want End of UN Iran Nuke Probe

VIENNA—Once a vociferous critic of Iran’s alleged work on nuclear arms, the U.S. is now joining five other world powers in urging the U.N. atomic agency to close the books on a protracted probe of the claims, according to a document obtained by The Associated Press.

The call is contained in a confidential draft resolution prepared for next week’s meeting of the 35-nation board of the International Atomic Energy Agency and shared Monday with all of those member nations.

The push by the United States, Russia, China, Britain, France and Germany to end the investigation is being launched despite a report last week from IAEA chief Yukiya Amano concluding that Tehran did work related to nuclear arms up to 2009. And it comes after a near decade of heated U.S. accusations of such Iranian activities—charges Tehran denies.

But the call for closure makes sense as the six move from focusing on past activities that will likely forever remain murky and push for enactment of a July 14 deal with Iran mandating enforceable future constraints on nuclear technologies that Tehran could use to make such weapons.

The board must formally agree to end the probe and the resolution from the U.S. and its five partners is meant to achieve that aim.

Past board meetings urged the IAEA to continue its investigation of the allegations. This time, the resolution to be put forward for adoption by the board on Dec. 15 specifies that “the board’s consideration” of the allegations will be closed because Iran met specific deadlines in cooperating with the IAEA for it to be able to wrap up its investigations by this month.

Although the tone of request to end the probe is dispassionate, Western diplomats familiar with the drafting of the document said some statements at the board meeting will be critical of what the U.S. and its allies continue to say were Iranian attempts to develop nuclear arms.

At the same time, they said, the language in the resolution had to be neutral and acceptable to the Iranians in order to be able to advance early next year to implementing the July 14 deal that promises sanctions relief for Iran in exchange for cuts in its nuclear programs.

The diplomats demanded anonymity because they are not authorized to discuss the diplomacy leading up to the meeting.

The rest of the three-page draft deals with the IAEA’s role in monitoring Iran’s commitments in that deal and specifies that the board will move from pressuring Iran on its nuclear program to monitoring its compliance with the July 14 agreement.