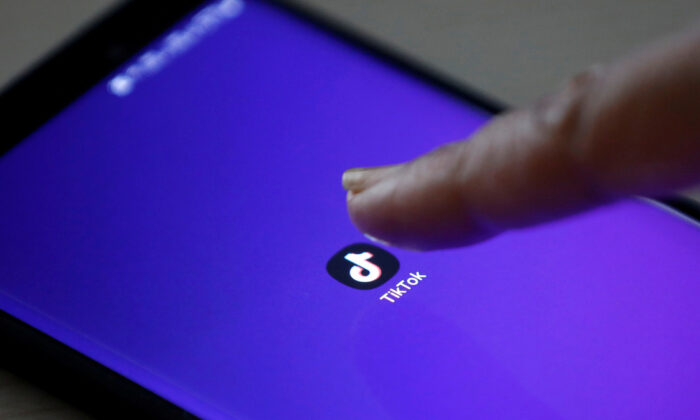 The logo of TikTok application is seen on a mobile phone screen in this picture illustration taken on Feb. 21, 2019. (Danish Siddiqui/Illustration/Reuters)
By Bowen Xiao

U.S. lawmakers have only recently called for a national security probe into the popular Chinese video-sharing app, though the acquisition by TikTok—which is owned by Beijing-based ByteDance Technology Co.—was completed in 2017. Concerns include the company censoring politically sensitive content, and how it stores users’ personal data.

The Committee on Foreign Investment in the United States (CFIUS), which reviews deals by foreign acquirers for potential national security risks, has started its review of the Musical.ly deal, the sources told Reuters. TikTok didn’t seek clearance from CFIUS when it acquired Musical.ly, the committee said, which gives the U.S. security panel scope to investigate it now.

CFIUS, which is chaired by Treasury Secretary Steven Mnuchin, didn’t respond to an Epoch Times request through the Treasury Department to confirm if such a review had been initiated.

In an Oct. 9 letter to Mnuchin, U.S. Sen. Marco Rubio (R-Fla.) urged a national security panel to review the acquisition over concerns that Chinese-owned apps such as TikTok “are increasingly being used to censor content and silence open discussion on topics deemed sensitive by the Chinese Government and Communist Party.”

Under the Trump administration, there has also been increasing concern about technology transfers between Washington and Beijing. Rep. Michael McCaul (R-Texas), the ranking member on the House Foreign Affairs Committee, recently called for the U.S. government to accelerate plans to establish rules on exports of critical technologies to China while expressing a “deep concern” at the current rate of the regulatory rollout.

Michael Brown, the director of the Defense Innovation Unit at the Department of Defense, said at a recent panel event that Beijing is now leading in a number of emerging revolutionary technology industries such as hypersonics and artificial intelligence and said the United States’ relationship with the Chinese Communist Party must change when it comes to technology transfers, The Epoch Times previously reported.

TikTok allows users to create and share short videos, and the app is growing in popularity among U.S. teenagers. About 60 percent of TikTok’s 26.5 million monthly active users in the United States are between the ages of 16 and 24, the company said this year.

The sources told Reuters that CFIUS is in talks with TikTok about measures it could take to avoid divesting the Musical.ly assets it acquired. The sources requested anonymity because CFIUS reviews are confidential.

A TikTok spokesperson didn’t immediately respond to a request by The Epoch Times for comment, but a spokesperson told Reuters the company “has made clear that we have no higher priority than earning the trust of users and regulators in the U.S. Part of that effort includes working with Congress, and we are committed to doing so.” The spokesperson said he or she can’t comment on ongoing regulatory processes.

Senate Minority Leader Chuck Schumer (D-N.Y.) and Sen. Tom Cotton (R-Ark.) sent a letter last week to acting Director of National Intelligence Joseph Maguire asking for a national security probe, saying they were concerned about the app’s collection of user data, and whether China censors the content U.S. users can see. They also suggested TikTok could be targeted by foreign influence campaigns.

The company has said U.S. users’ data is stored in the United States, but the senators noted that ByteDance is governed by Chinese laws. TikTok claims China doesn’t have jurisdiction over the content of the app.

In October, the Trump administration placed 28 Chinese public security bureaus and companies—including video surveillance company Hikvision and seven other companies—on a blacklist due to concerns of human rights abuses.

Facebook founder and CEO Mark Zuckerberg, who has in the past gone to great lengths to please Chinese officials, recently made a speech at Georgetown University in which he criticized the Chinese regime for its internet censorship.

“China is building its own internet focused on very different values,” Zuckerberg said, noting that the Chinese regime “is now exporting their vision of the internet to other countries” through popular China-developed internet platforms.