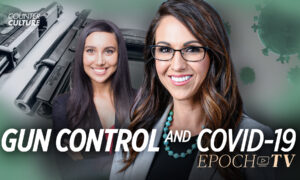 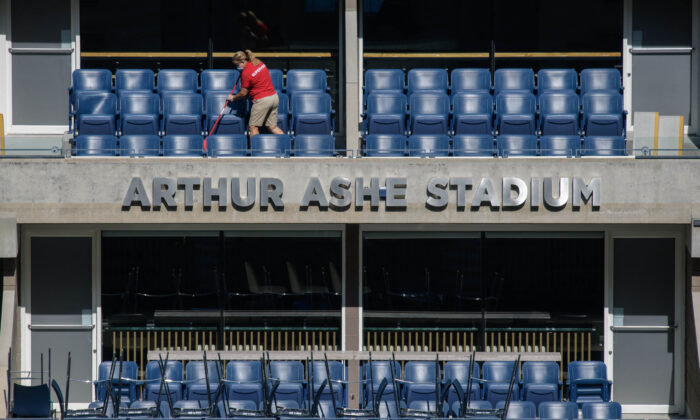 A worker sweeps a seating area at the Arthur Ashe stadium ahead of the 2021 U.S. Open Tennis tournament at the Billie Jean King National Tennis Center in Queens, New York, on Aug. 24, 2021. (Ed Jones/AFP via Getty Images)
Tennis

US Open Requires COVID-19 Vaccine for Spectators Days Before Tournament

The U.S. Tennis Associated (USTA) changed its policy on COVID-19 vaccines for the 2021 U.S. Open months after tickets went on sale, previously stating that unvaccinated fans would be allowed to attend the two-week Grand Slam tournament in New York.

Just days before the main draw is set to begin, the USTA announced in a statement that they’ve been informed by the New York mayor’s office that proof-of-vaccination documents will be required to enter Arthur Ashe Stadium, the main arena at the National Tennis Center.

“Given the continuing evolution of the Delta variant and in keeping with our intention to put the health and safety of our fans first, the USTA will extend the Mayor’s requirement to all U.S. Open ticket holders 12-years-old and older,” the USTA statement reads.

“Any U.S. Open attendee with tickets to Arthur Ashe Stadium, Louis Armstrong Stadium, The Grandstand, or the grounds of the U.S. Open, will be required to provide proof of at least one dose of a COVID-19 vaccine to enter the grounds.”

USTA statement regarding proof of vaccination to enter the US Open: pic.twitter.com/nf3ivZZM0i

The tennis tournament is set to begin on Aug. 30, and fans are requested to bring a Centers for Disease Control and Prevention vaccination card or a photo or photocopy of the card as a way to prove their vaccination status.

In an earlier statement, the USTA said spectators wouldn’t be required to wear masks or show proof of their vaccination status to attend matches at the U.S. Open.

A USTA spokesperson told The New York Post that following the new mandate, a ticket holder who hasn’t been vaccinated against the CCP (Chinese Communist Party) virus is encouraged to get a vaccine, sell their ticket to someone who’s vaccinated, or go to refund options on the Ticketmaster website.

“The goal is not to prevent all cases of COVID. The goal, really, is to be certain that we don’t have an outbreak of COVID that’s going to be unusual or that we would regret,” Dr. Brian Hainline, a USTA first vice president and member of its medical advisory group, said on a conference call with reporters earlier this week.

Players aren’t required to get vaccinated against the CCP virus to compete in the tournament, the USTA previously announced after some players expressed reluctance to get the shot. If a player tests positive, they’ll be forced to isolate for 10 days and withdraw from the tournament.