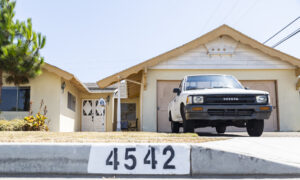 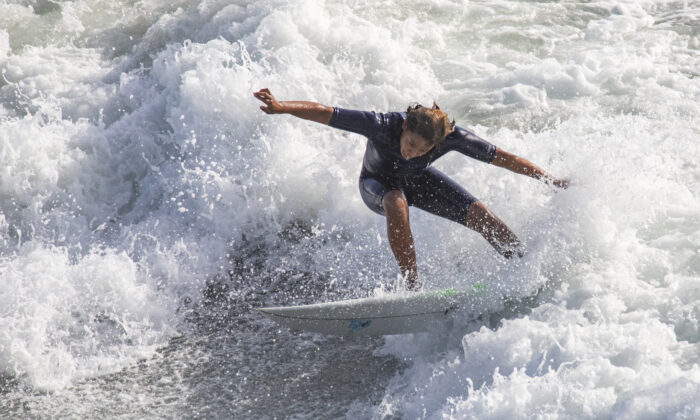 A surfer practices for the US Open of Surfing in Huntington Beach, Calif., on Sept. 22, 2022. (John Fredricks/The Epoch Times)
Southern California

US Open of Surfing Returns to Huntington Beach

The largest surfing event in the world has returned to the shores of Huntington Beach, California, after its cancellation in 2020.

The reactivation of the 2021 U.S. Open of Surfing Huntington Beach is being held from September 20th–26th. As a major stop on the World Surf League’s (WSL) worldwide tour, 96 men and 64 female professional surfers compete for a first-place cash prize of $20,000 for both male and female divisions.

The contest, formerly known for drawing upwards of 500,000 people, is divided into 5 stages of rounds surfed between four surfers per heat until reaching the sixth state of the final round this Sunday, where surfers are judged by their two highest-ranking waves, ranging from one to ten points during their heat’s 30-minute interval.

Tuesday morning’s surf conditions ranged into the 1–4-foot range with light winds, but the lack of power on the peaking waves created a challenge for the surfers as they pumped with their boards through the surf’s flat sections.

“We are actually fortunate to even have a little of this Northwest swell,” big wave surfer and WSL commentator Peter Mel announced during the contest.

He chuckled, “Because if not, it would be even smaller.”

If successful in making the reforming section of the surf, the competitors could use the remainder of the wave to sneak in their most powerful maneuver before the wave collapses on itself near the sand.

The last heat of the women’s contest on Wednesday saw surfers—Molly Picklum (Australia); Alyssa Spencer, 18, of Carlsbad, California; Ella McCaffray, 18, of Encinitas, California; and Nadia Erostarbe (Spain)—battle it out in the inconsistent waist to chest high waves as hundreds watched from the beach and Huntington Beach Pier.

McCaffray caught the first wave of the heat with a quick drop-in followed by a confident turn off the top of the wave. After making it through the flat section, the wave speed increased closer to the shore allowing her to complete a final snap with the judges giving her a 4.83 out of 10.

Up next was Erostarbe whose aggressive style made the most a wave that lacked power on takeoff by pumping her board into steeper sections of the wave and throwing two backside snaps, but unfortunately stumbled off her board shortly after her second maneuver.

“The fall will definitely factor in,” Mel commentated.

“Even if you have a nice maneuver, a fall will generally leave a sour taste in the judge’s mouth and not necessarily throw down big numbers.”

The next wave of the heat saw Spencer give way to a rocky start by failing to access a surfable part of her wave for tricks and pulled off of it for a better option.

Those watching the contest have the option of selecting “who will win” between the surfers of each heat, and predicted McCaffray as the WSL fan-picked favorite of the heat, with 51 percent of the votes. With over 20 minutes left on the clock, she had the time she needed to make selective decisions on her upcoming wave.

Picklum took on the next wave to roll through, only to also pull off after not obtaining the speed needed to make it to the inside section, receiving a 0.57 from watching judges.

Though each woman managed to commit to several point-making maneuvers over the course of the 15 waves, only two would advance to the next round of contenders hungry for the win.

“There looks like there could be an opportunity here,” Mel shared watching Picklum paddling into a crumbling chest-high wave.

“This could be the big moment …”

It was now the final 3 minutes of the heat and Picklum, still in last place, needed a 7.16 to advance to the next round.

No longer having the time for wave selections, she took off on a wave and did a small top turn while surfing towards the pier when her wave began to flatten off.

She then powerfully pumped her board through the flat section with the wave reforming to flow in the opposite direction, allowing her the speed to throw her fins over the top of the wave and complete a turn for the completion of a two-trick wave. Judges gave her a 5.30, moving her to 3rd place within the heat.

Spencer, smoothly surfing the wave of the heat just before Picklum, would go on to winning between the four women with a score total of 9.17.

She will progress to the next round of the contest taking place tomorrow, along with Erostarbe who achieved an 8.83 from contest judges.

The two women will continue pushing towards the final round set to happen Sunday, which is forecasted to have improved surfing conditions.