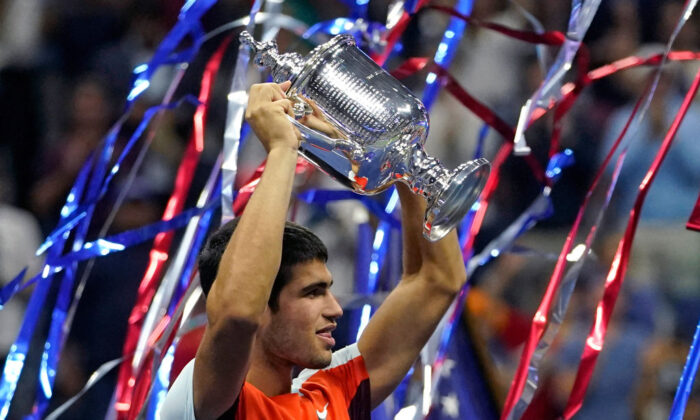 The U.S. Open tennis tournament in New York concluded Sunday. It will be remembered on the women’s side for Serena Williams’s last professional match. On the men’s side, for the first major win by 19-year-old Spaniard Carlos Alcaraz. Unfortunately, his win comes with an asterisk, since Novak Djokovic, arguably the best player in the world, was unable to play. He was prohibited from entering the country because he has not been vaccinated, despite having had COVID-19, which most agree provides better protection than the vaccine, and clear evidence now that the vaccine does not prevent infection or transmission.

In addition, his win comes with a fundamental unfairness, thanks to a U.S. Open policy which may even be illegal. As a men’s player, the U.S. Open required that Alcaraz play best of five sets matches. The women players were only required to play best of three sets. Yet, the U.S. Open refused to provide “equal pay for equal work.” Instead, it paid Alcaraz and all the men’s players the same as the women, despite the additional work.

Alcaraz played a total of 27 sets over the two-week tournament before being crowned champion. By contrast, the female winner, Iga Swiatek, played only 16 thanks to the best of three sets format.

This makes sense only in a woke world obsessed with “equity.” The left no longer seeks “equal pay for equal work.” That is “equality.” Equity, we have come to learn, has nothing to do with equality. It is all about equal outcomes irrespective of just about anything else, including the amount or quality of work.

The term “equity” has swept into our vocabulary and culture like perhaps no other word in decades. It sounds great, but in fact is simply a replacement for “affirmative action.” Affirmative action does not poll well. In fact, even in liberal California, voters overwhelmingly rejected affirmative action in 2020 by 15 points.

Equity is also another word for “communism,” a word which also does not poll well. Of communism, Karl Marx wrote that it asks, “from each according to his ability, to each according to his needs.” In other words, pay people the same regardless of ability. That is what “equity” does. Nothing is more antithetical to the American free market system, wherein the harder you work and the better you are, the more you succeed and the more you make.

Under the federal civil rights law, men and women are to be paid the same if doing the exact same job with the same level of experience and expertise. Applying this to the U.S. Open would mean the women should be paid 60% of what the men are paid since they play 40% less. If they want the same pay, they should simply also play best of five sets. Frankly, it is somewhat demeaning to the women to not require they play best of five sets. Women have no problem running marathons and playing 90-minute soccer matches just like men.

However, the truth is, it is not the same job. Men’s tennis is vastly different from women’s, and hence the reason they have separate leagues. As Serena Williams has said, “Men’s tennis and women’s tennis are two completely different sports. If I were to play [a man], I’d lose 6-0, 6-0 within 10 minutes. Men are a lot faster, they serve and hit harder. It’s a different game.”

So, there is absolutely zero justification for paying women the same as the men. Yet, all four major tennis tournaments (US, Australian, French and Wimbledon) pay women the same, proudly wearing their wokeness on their sleeves.

This has emboldened women in other sports to demand the same. The U.S. women’s soccer team has also made this demand. Not surprisingly, the U.S. Soccer Federation caved and agreed. They even gave the women $22 million in backpay! It’s much easier to cave to the radical leftists then stand up for the free market.

As with tennis, men’s and women’s soccer is the same in name only. There is no comparison between the two when it comes to both the quality of play and the level of public interest.

We must return to pay being determined by the free market. Equity imposes the opposite of the free market. Its concern is not for advancing the best, it is about equal outcomes based on race, sex, gender identity, and sexual orientation. When implemented, it destroys the meritocracy required for successful free markets.

And, like most utopian ideas of the left, it will inevitably eat its own. The U.S. women’s soccer team is the best in the world. The U.S. men’s team is far from it. Why should we limit the women’s team to making the same as the men? If, due to their success, there comes a day when they generate more revenue than the men’s team, they should be paid more. Free markets mean freedom. It is not something to be afraid of, but to embrace.