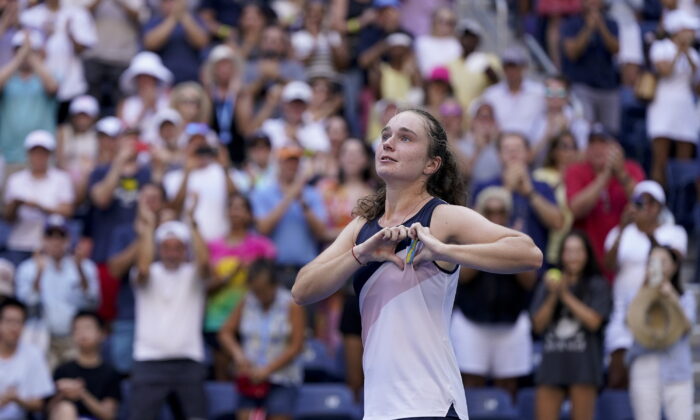 Daria Snigur, of Ukraine, reacts after upsetting Simona Halep, of Romania, during the first round of the US Open tennis championships, in New York, Aug. 29, 2022. (Seth Wenig/AP Photo)
Tennis

Simona Halep had another early exit, this one coming in a memorable first tour-level win for Ukrainian Daria Snigur.

Snigur upset the No. 7 seed 6–2, 0–6, 6–4, then struggled through tears to explain what the victory meant to her family and her country, which is at war with Russia.

On the same Arthur Ashe Stadium court where that night Serena Williams was set to begin what could be the final tournament of her career, the top-seeded Medvedev looked just as strong as he did in sweeping past Novak Djokovic in last year’s final for his first major title.

Medvedev advanced to face Arthur Rinderknech of France. The Russian is trying to become the first repeat champion at the U.S. Open since Roger Federer won five straight from 2004–08.

“I need to be at my best on Wednesday and I’m going to try to make it,” Medvedev said.

Andy Murray was another early winner, 10 years after winning the first of his three Grand Slam titles in Flushing Meadows.

“It seems like a long time ago,” Murray said of his victory over Djokovic in 2012. “A lot’s happened since then in my career.”

Djokovic couldn’t travel to the tournament this year because he isn’t vaccinated against COVID-19.

Many fans arriving for the day session at the final Grand Slam event of the season were focused on the match that would lead off the action at night.

Williams, the 23-time major champion who has said she is preparing to end her tennis career, was scheduled to face Danka Kovinic.

Coco Gauff wasn’t going to miss it, saying she was going to change plans and attend instead of watching on TV in her hotel room.

“As I thought about it, I was, like, I have to watch,” the 18-year-old American said after her straight-sets victory. “I’m excited and, you know, it’s not often we watch live matches, to be honest.”

Williams figured to face more comfortable conditions after a hot start under a sunny sky in Flushing Meadows.

Leading 3–0 in the third set, Medvedev told the chair umpire he wanted a bag of ice so he could put it on his head.

“It was pretty hot today and humid,” Medvedev said. “I see the other guys coming from five-setters in the locker room, pretty red faces.

That’s also fun in a way sometimes to get through these conditions. Even today, the match was maybe not that intensive and long, but, yeah, I sweated a lot and it was not easy.”

Snigur was playing her first match in the main draw of a Grand Slam. The 20-year-old wore a ribbon in the blue and yellow colors of Ukraine’s flag on her chest, and she put her hands around it after finishing off the victory.

She played last week in the “Tennis Plays for Peace Exhibition” to raise money to aid Ukraine. That was on Louis Armstrong Stadium, which may have calmed her nerves a bit when she was sent back out onto the same court Monday.

Halep had won 19 of her last 22 matches and recently returned to the top 10, but the U.S. Open has been the most challenging major for the two-time Grand Slam champion.

She is 21–11 in New York and has lost in the first round of three of her last five appearances.

Bianca Andreescu, the 2019 U.S. Open champion, needed three sets to get past Harmony Tan, the French player who beat Williams in the first round at Wimbledon.

Two other past champions had short stays. Dominic Thiem, the 2020 champion who missed last year because of injury, fell to Pablo Carreño Busta in four sets.

The 2016 winner, Stan Wawrinka, retired from his match against Corentin Moutet after losing a second-set tiebreaker. He has been plagued by injuries in recent years.

Another American advanced in an upset, with J.J. Wolf ousting No. 16 seed Roberto Bautista Agut in straight sets.

He had played his way into the field through the qualifying tournament, joining countryman and fellow qualifier Zhang Zhizhen as the first Chinese men in the U.S. Open main draw since the open era began in 1968.

Third-seeded Maria Sakkari and No. 17 Caroline Garcia were among the early winners on the women’s side, with Sakkari overcoming Wimbledon semifinalist Tatjana Maria in three sets.