US Olympic Swimmer Michael Andrew Says He Won’t Get Vaccinated 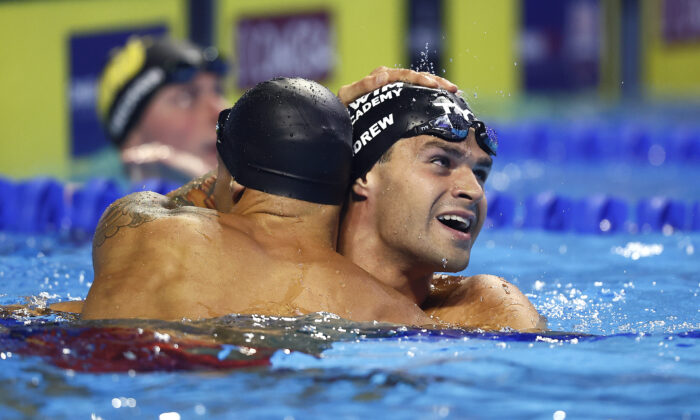 Caeleb Dressel and Michael Andrew of the United States react after competing in the Men's 50m freestyle final where Dressel set a new American Record during Day Eight of the 2021 U.S. Olympic Team Swimming Trials at CHI Health Center on June 20, 2021, in Omaha, Nebraska. (Tom Pennington/Getty Images)
By Jack Phillips

With several weeks to go before the start of the Olympic Games in Tokyo, U.S. Olympic swimmer Michael Andrew said he won’t be taking the COVID-19 vaccine.

Andrew told Reuters and other reporters last week that he won’t get the vaccine because he doesn’t want to experience any possible vaccine-related reactions.

“My reason behind it is—for one, it was in the last moment; I didn’t want to put anything in my body that I didn’t know how I would potentially react to,” Andrew said. “As an athlete on the elite level, everything we do is very calculated. For me in the training cycles and especially at trials, I didn’t want to risk any days out, because there are periods where if you take a vaccine, you have to deal with some days off.”

Athletes who are competing in the Olympics aren’t required to get the vaccine. Japan this week, however, declared a COVID-19-related emergency due to rising infections, leading Olympic organizers to ban all spectators when the Games start on July 23.

Later in a conference call, Andrew, who said he likely won’t receive the vaccine in the distant future, said he will comply with the COVID-19 testing and other protocols while in Tokyo.

“USA Swimming and all of us here have been through a very strict protocol with lots of testing, masks, socially distant, obviously staying away from crowds, everything like that,” Andrew said.

USA Swimming CEO Tim Hinchey said he believes “around 90 percent” of the U.S. national team has received the vaccine.

Several weeks ago, Buffalo Bills receiver Cole Beasley similarly announced he wouldn’t get the COVID-19 vaccine, although for different reasons. In a tweet, Beasley said he’d rather retire than receive the shot.

“I will be outside doing what I do. I’ll be out in public. If you’re scared of me then steer clear, or get vaccinated,” he wrote. “I may die of COVID, but I’d rather die actually living.

“Fine me if you want. My way of living and my values are more important to me than a dollar. I love my teammates and enjoy playing ball because all the outside bs goes out the window in these moments. I just want to win the Super Bowl and enjoy these relationships that will be created along the way.”

The Epoch Times has contacted Team USA for comment.