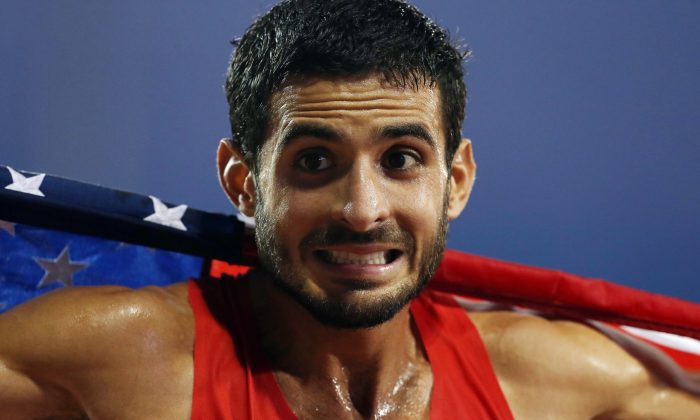 David Torrence of the USA celebrates winning Silver in the Men's 5000m Final during Day 15 of the Toronto 2015 Pan Am Games at the Pan Am Athletics Stadium on July 25, 2015 in Toronto, Ontario, Canada. (Vaughn Ridley/Getty Images)
Crime and Incidents

An American Olympic middle-distance runner was found dead at the bottom of a swimming pool in Arizona Monday, Aug. 28.

Thirty-one-year-old David Torrence competed for Peru back in the Rio Olympics. Authorities said there were no immediate signs of foul play at the condo complex, The Washington Post reported. He was pronounced dead at the scene.

Torrence had left his home in Malibu, California, to undergo training in Arizona just weeks ago, police said. Only a day before his death his Strava profile (a running GPS tracker) revealed that he had completed a 7.3 mile run on Sunday.

Kyle Merber, another runner, and friend of Torrence posted his condolences on Twitter.

“Today we lost an amazing athlete and an even greater friend,” the tweet said.

Back during the Rio Summer Games, Torrence ran for Peru, his mother country. He was 15th in the men’s 5,000 meters run and is now Peru’s national record holder in several events, from the 800 meter to the 5,000 meter, according to NPR.

Just last weekend Torrence was competing in the England’s Emsley Carr Mile, according to his personal Twitter account.

He came in fourth place and said that he could have done better, but was still happy to be competing.

“Solid 4th place in the Emsley Carr Mile! Not quite what I was hoping for, but happy to be mixing it up with the best in the [world]”, Torrence tweeted on Aug. 20 in England.

Other elite runners in his community were shocked to hear the news, saying they were devastated.

Runner Matt Llano said he had plans to have lunch on Wednesday with Torrence.