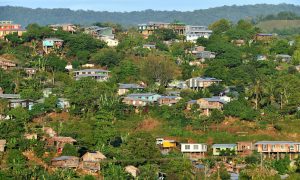 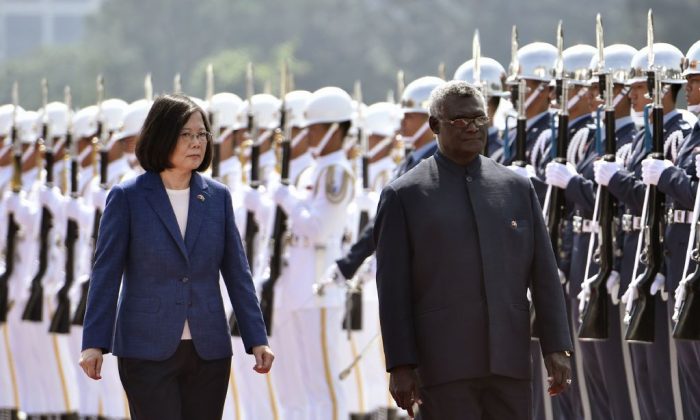 US Officials Speak Out Against Beijing, Solomon Islands After Diplomatic Breakup With Taiwan

After the Solomon Islands earlier in the week decided to ditch its decades-long diplomatic relationship with democratic Taiwan in favor of the Chinese Communist regime, U.S. officials have criticized the move, calling out Beijing for its coercion tactics.

Meanwhile, the decision has highlighted the Chinese regime’s ambitions in the Indo-Pacific region.

The Solomon Islands, a South Pacific island nation located near Papua New Guinea and Australia, broke off its ties following a vote by the coalition government caucus headed by  Manasseh Sogavare on Sept. 16.

“China’s active campaign to alter the cross-Strait status quo, including by enticing countries to discontinue diplomatic ties with Taiwan, is harmful and undermine regional stability,” a U.S. State Department spokesperson said in an email response to The Epoch Times.

The spokesperson further expressed “disappointment” in both the Solomon Islands and Beijing—the former for abandoning its diplomatic ties with Taiwan, and the latter for its “continued campaign to shrink Taiwan’s international space.”

David Stilwell, assistant secretary of state for East Asian and Pacific affairs, called the switch “unfortunate” during a hearing before the U.S. Senate foreign affairs committee on Sept. 18.

Beijing considers the self-ruled island of Taiwan, officially known as the Republic of China, as part of its territory, despite it being a de facto democratic country with its own elected officials, constitution, and currency. The Chinese regime has consistently threatened the use of military force to bring Taiwan under its reign.

Beijing has also pressured other countries to embrace its interpretation that mainland China is the only China.

The Taiwanese government has accused Beijing of deploying “dollar diplomacy”: providing investments and loans to Taiwan’s allies so that they drop their ties.

In response to Taiwanese media reports that Beijing had promised the Solomon Islands $500 million in aid if the latter switches diplomatic recognition, Taiwan’s Foreign Minister Joseph Wu said on Sept. 16 evening that the reports were “consistent with our intelligence,” according to Taiwan’s government-run Central News Agency (CNA).

Though formal diplomatic relations between Taiwan and Washington were severed after the latter switched diplomatic recognition to Beijing in 1979, Taiwan remains a key U.S. ally in the Indo-Pacific region. Washington is also the chief supplier of arms for Taiwan’s self-defense.

The State Department in its email response reiterated the importance of Taiwan-U.S. relations. “Taiwan is a democratic success story, a reliable partner, and a force for good in the world. The United States will continue to support Taiwan, especially as it seeks to expand its already significant contributions to addressing global challenges,” the spokesperson said.

U.S. Vice President Mike Pence also canceled his plans to meet with Solomons Prime Minister Manasseh Sogavare this month, according to Reuters, citing an unnamed senior U.S. official. The meeting was going to take place either on the sidelines of the U.N. General Assembly meeting or in Washington.

CNA had reported that Pence planned to tell Sogavare that a good relationship between Taiwan and Solomons would have the strong support of the U.S. government.

Senator Ted Cruz (R-Texas) urged in a press release for the United States to “redouble our efforts to bolster Taiwan’s security against Chinese aggression.”

Senators Cory Gardner (R-Col.) and Marco Rubio (R-Fla.) both tweeted that Congress should pass the TAIPEI Act (S.1678), which proposes allowing the Secretary of State to modify diplomatic relations with, and foreign assistance to, countries that sever ties with Taiwan. Rubio also said that he was “exploring ways” to cut off the Solomon Islands’ access to U.S. banking and ending U.S. financial aid to the country.

Experts and the U.S. administration have long expressed concerns about China’s growing ambitions in the region.

“China is leveraging military modernization, influence operations, and predatory economics to coerce neighboring countries to reorder the Indo-Pacific region to their advantage,” stated the Pentagon’s U.S. National Defense Strategy of 2018.

The report warned that China “seeks Indo-Pacific regional hegemony in the near-term and displacement of the United States to achieve global preeminence in the future.”

Many Pacific nations are now heavily indebted to China after obtaining high-interest Chinese loans to build up their infrastructure.

China currently accounts for nearly half of Vanuatu’s $440 million foreign debt, according to The Sydney Morning Herald.

In the South Pacific archipelago Tonga, the country owes about $108 million to the state-owned Export-Import Bank of China, about 25 percent of the country’s GDP.

“Such indebtedness gives China significant leverage over Pacific Island countries and may see China place pressure on Pacific nations to convert loans into equity in infrastructure,” the Australia-based think tank Lowy Institute said in a 2018 report.

Others have warned about a Chinese military buildup in the region. “The most troubling implication for Australian interests is that a future naval or air base in Vanuatu would give China a foothold for operations to coerce Australia, outflank the U.S. and its base on U.S. territory at Guam, and collect intelligence in a regional security crisis,” wrote Rory Medcalf, head of National Security College at the Australian National University, in a 2018 Lowy Institute report.

Medcalf also told the Associated Press that the area could provide a “security bridgehead” for the Chinese navy. Beijing could also be interested in the region’s fisheries and natural resources, and luring away the remainder of Taiwan’s allies.

The diplomatic breakup has not been fully welcomed by locals.

In Auki, the capital of Solomon Islands’ Malaita Province, residents took to the streets in a peaceful protest against the decision on Sept. 17.

“We do not want a switch because we know it was done for the wrong reasons,” said one unnamed protester to local media Solomon Times.

Eddie, a 29-year-old bus driver in Auki, said: “Government must come out clear and tell us why they decide to switch. We know money is involved and so we must speak up.”

Another protester, Max Bobby, said he was worried about unemployment, as the Taiwan government has announced the closure of its embassy and health centers there.

Hubert Ramo, a student from the Solomon Islands National University, penned a letter to the editor published in Solomon Times, saying that locals are now at risk to work “as slaves” to Chinese loans that the government has borrowed.

“If we are not careful, then these beautiful Solomon islands will no longer own [sic] by you and me, but the Chinese,” he wrote.

“The choice between staying with democracy or switching to communism involves matters directly linked to our people and so the public’s view should never be ignored,” Wale added.

A previous version of this article misstated the bill number for the TAIPEI Act. The Epoch Times regrets the error.