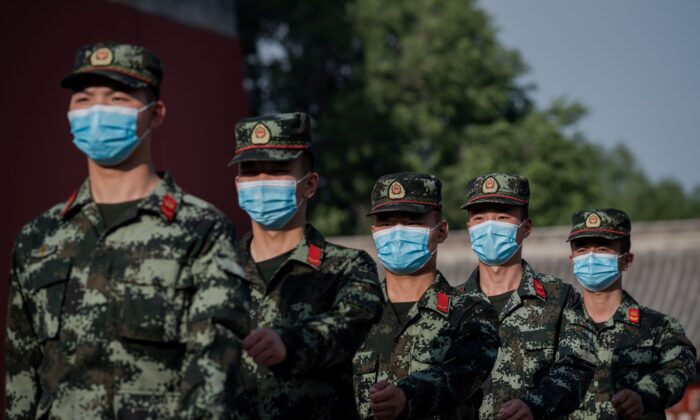 People's Liberation Army soldiers march next to the entrance to the Forbidden City (L) after the opening session of the National People's Congress (NPC) in Beijing on May 22, 2020. (Nicolas Asfouri/AFP via Getty Images)
US News

US Will No Longer Be Passive Toward China, White House Adviser Says

Robert O’Brien: ‘The days of American passivity and naivety regarding the People’s Republic of China are over’
By Bowen Xiao

Robert O’Brien, the national security adviser to President Donald Trump, and Christopher Wray, the director of the FBI, over the past two days highlighted the threat posed by the Chinese Communist Party (CCP), with both providing a glimpse into the administration’s latest efforts to counter the regime.

O’Brien, in a speech delivered to a group of Arizona business leaders, said the United States will no longer be passive in dealing with China, adding that his remarks would be the first of many such speeches challenging China in the coming weeks.

Secretary of State Mike Pompeo and Attorney General William Barr, as well as other senior administration officials, are also expected to deliver speeches on this front, he said.

“The days of American passivity and naivety regarding the People’s Republic of China are over,” O’Brien said in Phoenix on June 24.

“America, under President Trump’s leadership, has finally awoken to the threat of the Chinese Communist Party’s actions and the threat they pose to our great way of life.”

“As China grew richer and stronger, we believed that the Chinese Communist Party would liberalize to meet the rising democratic aspirations of its people,” O’Brien said. “This was a bold, quintessentially American idea. It was born of our innate optimism and by the experience of our triumph over Soviet communism. Unfortunately, it also turned out to be very naive.”

O’Brien offered a list of Chinese activities that he said were aimed not only at repressing its own citizens, but influencing Americans. He made a point of saying he was not attacking the Chinese people, but the Chinese Communist Party.

Wray, meanwhile, revealed that the bureau currently has more than 2,000 active investigations that trace back to the CCP. He told Fox News that over the past decade, there has been a roughly 1,300 percent increase in economic espionage probes with links to the Chinese regime.

The FBI director also accused the CCP of trying to interfere in U.S. politics and of spying on Fortune 100 companies—the top 100 companies in the country as ranked by their employees.

“There’s no country that presents a broader, more comprehensive threat to America’s innovation, to our economic security, and to our democratic ideas than China does,” he told the network on June 24.

Wray also said that the bureau is “opening a new counterintelligence investigation that ties back to China every 10 hours.”

Under Trump, the United States has imposed restrictions on U.S. semiconductor technology from going to Huawei and has limited the People’s Liberation Army’s ability to use student visa programs to place its officers in U.S. colleges and universities.

“They are starting to understand the fundamental challenge that Beijing poses to American society,” Chang told The Epoch Times.

“There’s always been the hope that China would integrate into the international system, but recently it’s made clear that its moving in the wrong direction—that it’s becoming hostile, provocative, belligerent, aggressive,” he said. “We need to hear an American official say that it is the policy of the United States to end the rule of the Communist Party.”

The Pentagon recently decided to issue a list of Chinese companies owned or controlled by the Chinese military. Under a 1999 law, the Pentagon was mandated to give designations to any firms “owned or controlled” by China’s People’s Liberation Army (PLA) that are engaged in providing commercial services, manufacturing, production, or exporting.

The Trump administration is the first U.S. administration to take seriously the extent of the CCP threat, Peter Huessy, president of GeoStrategic Analysis, a defense and national security consulting firm, told The Epoch Times.

Frank Gaffney, former assistant secretary of defense for international security policy during the Reagan administration, told The Epoch Times that the Pentagon announcement “is a very significant development.”

“It’s shocking I think to the average American that we have the Chinese military industrial complex active in the United States of America,” he said. “One can only imagine what they’re doing here.”

Gaffney, who is vice chairman of the Committee on the Present Danger: China, said, “We can no longer ignore these very, very ominous indications of the malign intentions of the Chinese Communist Party toward the United States.”

Another concern is Huawei—the Chinese telecom giant that many in Washington view as a national security threat.

Keith Krach, a U.S. undersecretary of state for Economic Growth, Energy, and the Environment, said on June 25 that the United States may help other countries financially in order for them to buy from Western providers instead of Huawei.

Washington is lobbying European and other allies to exclude Huawei as they upgrade to 5G networks. Huawei denies that it facilitates Chinese spying or is controlled by the ruling Communist Party.