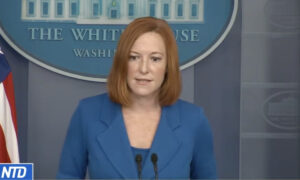 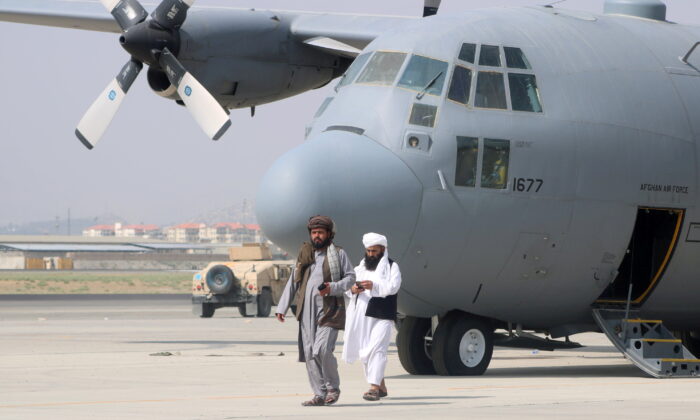 Taliban terrorists walk in front of a military airplane a day after the U.S. troop withdrawal from Hamid Karzai International Airport in Kabul, Afghanistan, on Aug. 31, 2021. (Stringer/Reuters)
Executive Branch

US Officials Defend Leaving Americans Behind in Afghanistan

U.S. officials are defending the pullout of all U.S. troops from Afghanistan despite Americans remaining in the country, despite a promise from President Joe Biden.

“We continue our mission to get them out. It’s just that it has shifted from a military mission to a diplomatic mission,” national security adviser Jake Sullivan said on Aug. 31 on ABC’s “Good Morning America.”

“And we have considerable leverage over the Taliban to ensure that any remaining American citizen will be able to get out,” he added, without describing the leverage.

Between 100 and 200 Americans are still in Afghanistan, according to State Department estimates.

Biden, who plans to speak on Afghanistan later Aug. 31, promised on Aug. 20 that the United States would evacuate every American who wanted to leave the country.

But at least some Americans who remain in the Taliban-held country said they tried to leave but weren’t successful.

“The last flight is gone and we’re left behind,” a U.S. citizen using a moniker said late Aug. 30 on CNN.

Americans who wanted to leave were forced to brave Taliban checkpoints, with some being beaten by members of the terrorist group. Some reported being blocked from passing through.

“We’re trying to determine exactly how many. We’re going through manifests and calling and texting through our lists, and we will have more details to share as soon as possible. Part of the challenge with fixing a precise number is that there are longtime residents of Afghanistan who have American passports and who are trying to determine whether or not they wanted to leave. Many are dual citizen Americans with deep roots and extended families in Afghanistan who resided there for many years. For many, it’s a painful choice. Our commitment to them and to all Americans in Afghanistan and everywhere in the world continues,” he said.

No Americans were evacuated on the last five jets, Gen. Kenneth McKenzie Jr. told reporters in a separate briefing.

“None of them made it to the airport and were able to be accommodated,” he said.

But critics say the evacuation efforts were deeply flawed, from the reliance on the Taliban to the failure to stop a bombing attack that left 13 U.S. troops dead.

They say the Aug. 31 withdrawal deadline, which Biden imposed over the summer, should have been pushed back until all Americans were evacuated.

“President Biden told the American people: ‘If there’s American citizens left, we’re gonna stay to get them all out.’ He didn’t keep his word. Hundreds of Americans are now stuck in Afghanistan at the mercy of the Taliban and ISIS-K,” Rep. Mike Rogers (R-Ala.), the top Republican on the House Armed Services Committee, said in a statement.

“We have a commander-in-chief that literally left Americans behind, reportedly as hostages now, in the hands of the Taliban,” Rep. Jackie Walorski (R-Ind.) said on Newsmax.

Asked why the withdrawal happened when it did, Pentagon spokesman John Kirby said on CNN’s “New Day” that the military’s job “is to provide options to the commander-in-chief, but it’s not to make policy.”

“We don’t see a military role here in helping these, these last individuals getting out. And obviously, our job is to provide the president options, but I don’t foresee that that’s an option right now that is going to be needed,” he said.

Sullivan said Biden received a unanimous recommendation from Defense Secretary Lloyd Austin, Blinken, all of his civilian advisers, all the commanders on the ground, and the Joint Chiefs of Staff “that the best way to protect our forces. And the best way to help those Americans [still in Afghanistan] was to transition this mission.”

“At the end of the day, the question will be, did we protect those American citizens did they get out if they wanted to get out? We believe that we will get out any person who wants to get out and we will have completed that mission,” he added. “And those who are criticizing are not the ones who have to sit in the Situation Room and make the hard calls about the threats that we face and the objectives we’re trying to obtain and President Biden made that hard call and it is a call he believes will ultimately serve the interests of our people.”