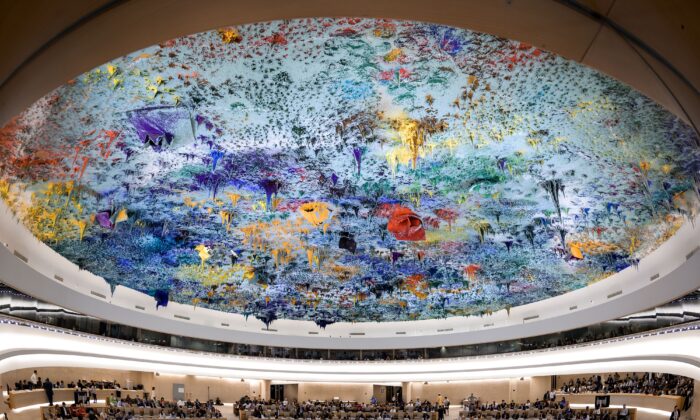 The United States is returning to the United Nations Human Rights Council more than three years after Trump administration quit the 47-member body that it had branded a “protector of human rights abusers.”

The U.N. General Assembly on Oct. 14 elected the United States as one of 18 new members to the Geneva-based council in an uncontested ballot. The United States received 168 votes for a three-year term beginning on Jan. 1 next year, the second lowest after Eritrea, which got 144 votes.

U.S. Ambassador to the United Nations in New York Linda Thomas-Greenfield said Washington would initially focus on “what we can accomplish in situations of dire need, such as in Afghanistan, Burma, China, Ethiopia, Syria, and Yemen.”

“Our goals are clear: stand with human rights defenders and speak out against violations and abuses of human rights,” she said in a statement, adding that the United States would also “oppose the council’s disproportionate attention on Israel.”

Then-President Donald Trump pulled out of U.N. rights body in 2018, saying it had failed to live up to its name, citing China, Cuba, and Venezuela as some of the worst rights abusers sitting on the council.

China, which gained a second consecutive term last October by a narrow margin, has been leveraging the platform to expand influence, observers and researchers say.

Jiang Duan, minister at China’s mission to the U.N. in Geneva, was appointed last April to a five-member panel on the human rights council that helps select the body’s independent investigators, despite the regime’s track record of oppression.

In July 2019, Beijing’s delegation twice interrupted a speech by Denise Ho, a Hong Kong singer and prominent pro-democracy activist banned in mainland China, as she urged the council to speak up on the territory’s autonomy.

Announcing the U.S. bid to return to the body in February, Secretary of State Antony Blinken acknowledged the council’s flaws, but argued that “improving the Council and advancing its critical work is best done with a seat at the table.”

U.N. Watch, a U.N.-accredited non-profit, deemed only five out of the 18 new member countries as fit to join the council. With Thursday’s U.N. election results, the caucus of democracies has sunk to just under a third of the total membership, it said.

“The U.S. has promised to work on reforming the council’s membership, methods and agenda—this will be a tall order,” Hillel Neuer, the group’s executive director, said in a statement ahead of the election. “When the UN’s highest human rights body becomes a case of the foxes guarding the henhouse, the world’s victims suffer.”

Sen. Jim Risch (R-Idaho), the top Republican on the Senate Foreign Relations Committee, decried the U.S. decision to rejoin the council as a “disgrace.”

“The United States should not be lending its legitimacy to a body that includes perpetrators of human rights abuses like China, Venezuela, and Cuba,” the senator said in a statement. “The Biden Administration will pat itself on the back for rejoining this flawed body. However, it will have done so without securing any necessary reforms, while failing to support human rights around the world.”

Questioned about Washington’s reform plans at the human rights council, State Department spokesperson Ned Price said that the United States will “press against the election of countries with egregious human rights records.”

“It is, of course, grossly inappropriate for such countries to be represented on the Human Rights Council,” he said in a Thursday press briefing without mentioning any specific names.

Price added that “we’re gratified today that we will become a member of the council.”

“We would have no influence were we standing on the outside,” he told reporters.