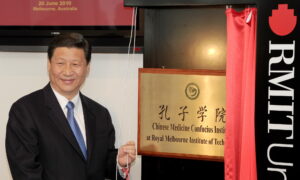 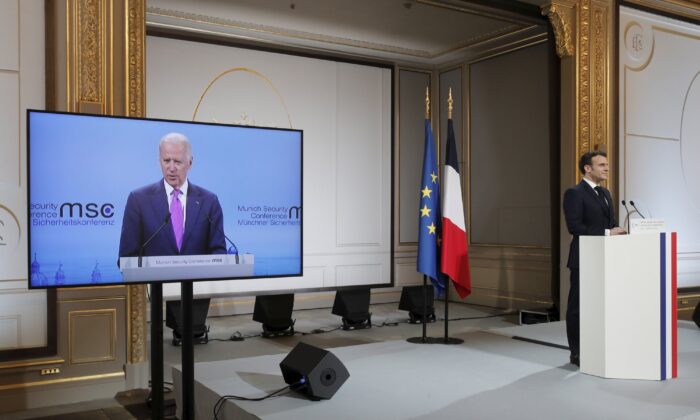 French President Emmanuel Macron, right, attends a video-conference meeting as U.S. President Joe Biden appear on a screen ahead of a 2021 Munich Security Conference at the Elysee palace in Paris on Feb. 19, 2021. (Benoit Tessier/Pool via AP)
US News

The U.S. officially rejoined the Paris climate accord on Friday about one month after President Joe Biden signed more than a dozen executive orders on his first day in office, including to rejoin the global pact.

“We can no longer delay or do the bare minimum to address climate change,” Biden told European leaders during a video conference on Friday. “This is a global existential crisis, and all of us will suffer if we fail.”

For the United States—or any country—to reenter the agreement, a process of 30 days is required to file the paperwork to the United Nations, a period that ended on Friday.

Former President Donald Trump first announced in 2017 his intention to withdraw from the Paris Climate Accord, calling the United Nations framework to tackle climate change “a total disaster” for the U.S. economy that was too lenient towards communist China and its greenhouse gas emissions.

The Trump administration officially announced its withdrawal from the agreement in 2019.

Biden repeatedly promised to reenter the pact during his campaign and made it one of his first major moves as president. He has promised to chart a path toward net-zero U.S. emissions by 2050.

“A cry for survival comes from the planet itself,” Biden said in his inaugural address. “A cry that can’t be any more desperate or any more clear now.”

The aim of the accord is to limit the global temperature increase to below 2 degrees Celsius, preferably to 1.5 degrees Celsius, compared to pre-industrial levels. To achieve this long-term goal, according to the U.N., countries “aim to reach global peaking of greenhouse gas emissions as soon as possible to achieve a climate neutral world by mid-century.”

The Biden administration also says it will set a tougher new target for U.S. emissions cuts by the time Biden hosts a planned Earth Day global summit for world leaders on April 22.

According to multiple experts and top officials, rejoining the global pact as it stands now will have devastating economic consequences for the United States, with little actual environmental benefit.

Sen. John Barrasso, a top Republican on the Senate energy panel criticized Biden for the move, tweeting: “Returning to the Paris climate agreement will raise Americans’ energy costs and won’t solve climate change. The Biden administration will set unworkable targets for the United States while China and Russia can continue with business as usual.″

Returning to the Paris climate agreement will raise Americans’ energy costs and won’t solve climate change. The Biden administration will set unworkable targets for the United States while China and Russia can continue with business as usual.

Nicolas Loris, the deputy director of the Thomas A. Roe Institute for Economic Policy Studies at the Heritage Foundation, said the agreement will have a heavy toll on American families and businesses.

“It will be very costly for Americans families and business because 80 percent of our energy needs are met through carbon-emitting conventional fuels,” Loris told The Epoch Times. “Regulating them and subsidizing alternatives is going to harm American families and taxpayers.