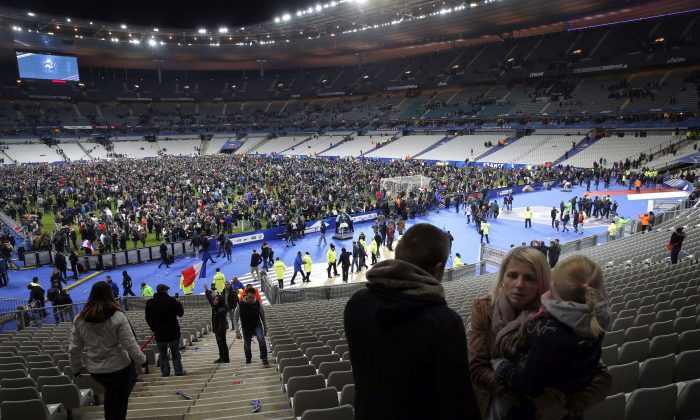 Supporters invade the pitch of the Stade de France stadium at the end of the international friendly soccer match between France and Germany in Saint Denis, outside Paris, Friday, Nov. 13, 2015. Hundreds of people spilled onto the field of the Stade de France stadium after explosions were heard nearby. French President Francois Hollande says he is closing the country's borders and declaring a state of emergency after several dozen people were killed in a series of unprecedented terrorist attacks. (AP Photo/Christophe Ena)
Europe

rA top American counter-terrorism expert has said that the attacks in Paris that left more than 100 dead looks more like something from an al-Qaeda (al-Qaida) affiliate due to the coordination involved.

There was also speculation that ISIS, or the Islamic State in Iraq and Syria, was behind the attacks. Neither al-Qaeda or ISIS have claimed responsibility.

U.S intel officials don’t know if this is al Qaeda or ISIS are scrambling no intel from French who r still responding #ParisAttack

Far too early to say who is behind this but suspects- Al Qaeda,who specialize in co-ordinated attacks,ISIS, or those inspired by 1 or both.

Supporters of ISIS celebrated the terrorist attacks on Twitter.

Earlier in 2015, Al-Qaeda’s branch in Yemen took responsibility for the shooting at the Charlie Hebdo magazine in Paris that left 12 people dead.

More than 100 people were held hostage  at the concert hall. French special forces attacked the venue, killing two attackers and freeing many hostages. However, many people were reportedly killed in the theater.

French President Francois Hollande closed down the nation’s borders and declared a state of emergency.

On Saturday morning, Deputy Mayor Patrick Krugman said, “We are facing an unknown and historic situation in Paris.”