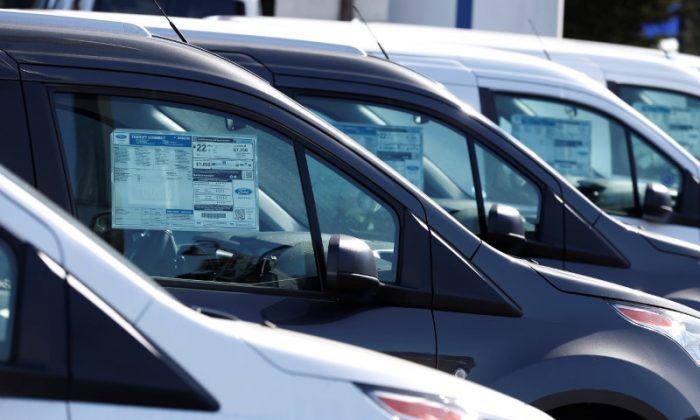 Vehicles for sale are seen at Serramonte Ford in Colma, California, on Oct. 3, 2017. (Stephen Lam/Reuters)
US News

“The year-over-year comparison is difficult as sales in October last year were inflated by vehicle replacement demand associated with Hurricanes Harvey and Irma,” Thomas King, senior vice president of J.D. Power’s data and analytics division, said in a statement.

October U.S. new vehicle sales will likely be about 1.349 million units, down marginally from 1.351 million units a year earlier, the consultancies said.

The forecast was based on the first 17 selling days of October. Automakers, including Ford Motor Co. and Fiat Chrysler Automobiles NV, will release October U.S. sales results on Nov. 1.

The consultancies said that in October consumers continued to shift away from passenger cars to pickup trucks and SUVs, which accounted for more than 70 percent of retail sales in the first 17 selling days of October.

This was the first time pickup trucks and SUVs had crossed the 70 percent threshold, the consultancies said. As recently as 2012, passenger cars accounted for more than half of sales.

The seasonally adjusted annualized rate of sales for October will be 17.4 million units, down from 17.9 million units in October 2017, the consultancies said.

Sales had originally been expected to drop further in 2018 because of rising interest rates and the return of more late-model used cars to dealer lots to compete with new ones.

With a strong U.S. economy and low unemployment, however, sales thus far have exceeded expectations.

Jeff Schuster, LMC’s president of operations for the Americas, said in a statement that high prices along with further interest rate hikes could cause problems for the auto industry.

“This is a combination that could cause consumers to be squeezed out of the new vehicle market, putting pressure on volume even if other fundamentals are favorable,” he said.