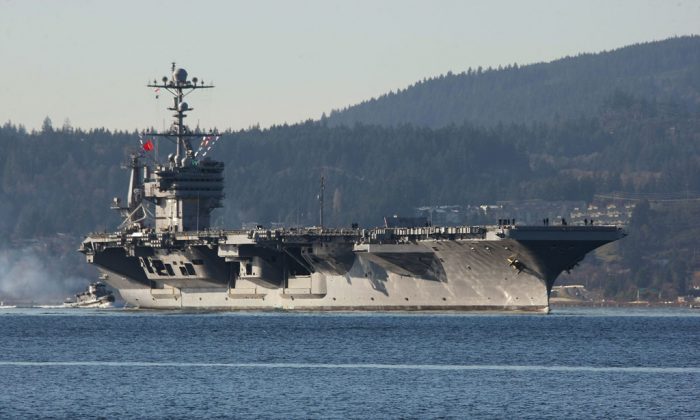 The aircraft carrier USS John Stennis near Bremerton, Wash., on Dec. 1, 2014. On Monday, Jan. 12, 2015, the ship sailed from Naval Base Kitsap in Bremerton, Wash., to Naval Magazine Indian Island, Wash., in order to take on ammunition before a training mission in the Pacific Ocean near San Diego, Calif. (AP Photo/Kitsap Sun, Larry Steagall)
US

The Stennis is 1,092 feet long with a 4.5-acre flight deck and can carry as many as 6,000 sailors and Marines. It has its own hospital, operating room, fire department and post office.

The first stop for the 20-year-old Stennis after leaving Bremerton Monday was Naval Magazine Indian Island, where it was scheduled to pick up 6 million pounds of ammunition. That process was expected to take three days and more than 1,400 crane lifts.

The Stennis returned from its last mission supporting the war in Afghanistan in May 2013 and underwent a 16-month, $240 million overhaul at the Puget Sound Naval Shipyard.