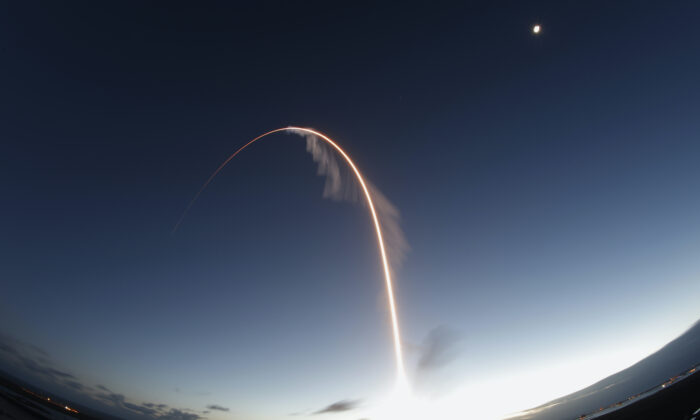 The United States military must invest in both offensive and defensive capabilities in outer space if it’s to effectively deter potential adversaries such as China and Russia, according to Air Force Secretary Frank Kendall.

“Space is a domain which you’re not trying to conquer per se, but use to provide services to your terrestrial forces,” Kendall said at a recent webinar hosted by the Center for a New American Security, a defense-focused think tank.

Kendall, who serves as the senior civilian leader for both the Air Force and the Space Force, said vital space-based systems that are responsible for communications, GPS, target acquisition systems, and the strategic early warning arrays that tell U.S. commanders when there’s a missile launch, are actively being threatened by the increasing contest for space dominance.

“They’re under attack,” Kendall said of the systems.

“We need to get to the right mix,” he said. “It is a combination of proliferation and [platform] desegregation.”

Kendall said he has developed a set of operational imperatives to address the greatest challenges facing the U.S. military, including deterring an increasingly aggressive Chinese Communist Party (CCP). He said such deterrence would fail without adequate changes to U.S. basing and the deployment of offensive space capabilities.

“We recognized several years ago that space was a contested domain,” Kendall said.

He noted that competing in space would require a much more agile strategy than is currently being employed by the U.S. military, one that would allow it to create ambiguity, appear to be in multiple locations at once when it isn’t, and utilize deception more effectively.

In space, specifically, it would require decentralizing the aging satellite architecture to ensure resiliency against attack by distributing vulnerable systems across larger constellations of smaller satellites, according to Kendall. Such an effort would also require the deployment of space-based systems capable of denying such services to the nation’s adversaries, he said.

Kendall didn’t specify what form these offensive systems might take, be they directed energy weapons such as lasers or microwave technologies or something more subtle, such as cyber packages or analog mechanical systems such as grabber arms. However, he did say that China was wasting no time in its own pursuit of offensive space capabilities.

“They’ve been moving very aggressively to operationalize space from a military perspective,” he said.

The comments were similar to those made by Gen. David Thompson of the U.S. Space Force in November 2021. Thompson said the CCP was attacking U.S. space infrastructure “every single day.”

Such attacks require an active response—a counter capability—because the type of attack the United States is trying to prevent is one of potentially catastrophic proportions, according to Kendall.

“The kinds of conflicts we’re trying to deter … are more like D-Day than they are like the Air Force’s strategic air campaign in Europe,” he said, referencing the allied bombing campaign in World War II. “They’re very compressed in time. They’re very high density.”

To that end, Kendall also said much more needed to be done to adequately defend both U.S. space infrastructure and its basing architecture throughout the Indo-Pacific, which he said was vulnerable to Chinese military technologies.

“[China has] noticed, it’s quite obvious, that we depend upon a small number of assets, including forward air bases, to conduct operations,” he said. “And because they’re fixed, they’re easily targetable.

“[China] built the assets to come after them. So we have got to respond to that.”

Kendall said the hour is late, the need is urgent, and that a failure to act now would be disastrous later.

“We cannot go forward with a presumption of superiority,” he said. “These problems are already upon us. They’re not a future thing that we have to worry about sometime in 5 or 10 or 15 years down the road. They’re here now.”

China and US have Different ‘Set of Targets’

Kendall said urgency doesn’t mean that the United States must react blindly, however. He noted the recent discussions about hypersonic weapon development as one area he thought was too reactionary and missed the greater strategic situation of the United States.

“China has a set of targets, and I can easily understand why they would want to field hypersonic weapons in reasonable quantities,” he said.

He noted that China has fielded many conventional weapons over a number of decades that could attack specific U.S. targets and that it was now adding hypersonics to that list. Each of these weapons provides some specific advantage for how China would want to strike at certain targets, he said.

To that end, Kendall said hypersonic weaponry is important in some limited applications for the U.S. military, but that the United States doesn’t share the same strategic priorities or targets as the CCP and therefore requires different military technologies.

“We don’t have the same target set that they’re worried about,” he said.

As such, he said the service would be better served by chipping away at impediments to the development of cost-effective weapons systems and an out-of-control bureaucracy that made any project require multiple years to get off the ground.

The remarks echoed sentiments by former Vice Chair of the Joint Chiefs of Staff Gen. John Hyten, who said a “brutal” bureaucracy and risk-averse culture were preventing the United States from developing new weapons systems.

With that in mind, Kendall underscored the seriousness of the competition between the United States and China, saying that the clash of powers is something unseen since the Cold War. To win, the United States would have to compete agilely and aggressively.

“I have 20 years of Cold War experience, worrying about an enemy who was thinking very hard about how to defeat us and trying to apply technology to that problem,” he said. “We’ve got that again. That’s where we are today.”