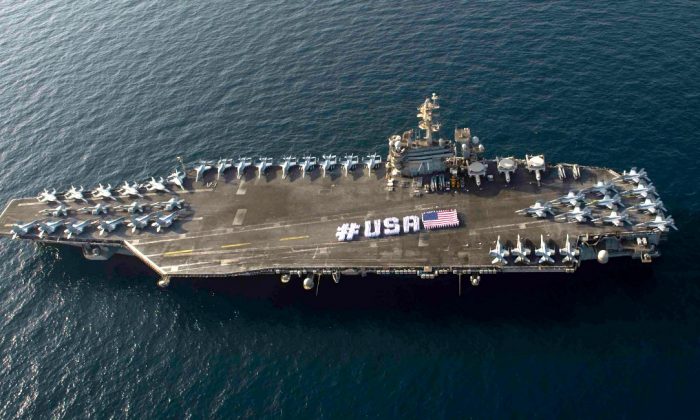 On Oct. 13, 1775, the U.S. Navy was created by a resolution of the Continental Congress. Throughout its illustrious history, the U.S. Navy has helped protect American citizens and interests around the world by protecting freedom of navigation, maintaining air superiority, and projecting American power abroad. Navy personnel have admirably served in conflicts since the earliest days of the American Revolution to recent engagements in the Persian Gulf, Afghanistan, and Iraq. This tradition of service continues today as Navy ships and aircraft continue to strike ISIS in Iraq and Syria.

The Navy has been “a powerful presence throughout the years,” priding itself on its ability to “bring security, democracy, peace, and prosperity to the American people.” In addition to its combat roles, the Navy has played an important role in responding to global humanitarian crises and natural disasters.

Despite its critical role in U.S. national security, the Navy’s battle force is currently the smallest it has been since World War I, thus hindering its ability to meet the needs of combatant commanders. The Navy’s current fleet of 271 active ships falls far short of the 346 ships advocated for in The Heritage Foundation’s Index of Military Strength and necessary to meet the two—major regional contingency standard.

The Navy, like the rest of our armed forces, has been hampered by budget cuts, which have reduced the Navy’s investment in training and operations, as well as its ability to modernize, or even maintain its current fleet. Additionally, while the Navy’s capabilities are aging rapidly, it does not have the funding to replace some of these weapons platforms, such as the Ohio-class ballistic missile submarine. Overall, this has led to a decrease in the readiness of the entire fleet. Budget cuts, coupled with high operational tempos have stretched the Navy thin.

While Iran Receives Billions From Lifted Sanctions, the US Military Is Cut by Billions
It’s Not Just the Navy, the Entire US Government Uses Outdated Software

While the U.S. Navy celebrates its 240th birthday, it is under the threat of continued budget cuts and a looming presidential veto of the National Defense Authorization Act. In order for the Navy to continue to execute its mission to the best of its ability, President Obama should support efforts that provide the Navy the tools that it needs to continue to be “to be where it matters, when it matters.”

Politics should not hamper the Navy’s ability to maintain peace around the world’s waterways. While our sailors continue to protect U.S. interests around the globe, it is the government’s constitutional responsibility to “provide and maintain a Navy.”

Thank you to all the men and women who have served or are currently serving in the Navy and the rest of our armed forces for your service and sacrifice.

Tyler Hanley is a member of the Young Leaders Program at The Heritage Foundation. Copyright The Daily Signal. This article was previously published on DailySignal.com