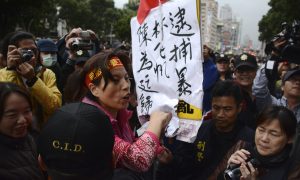 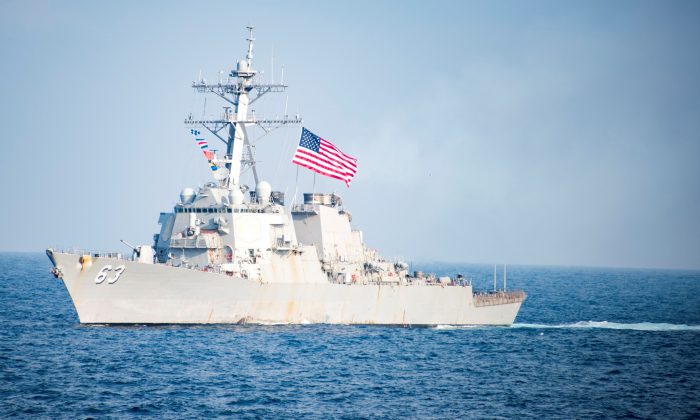 WASHINGTON—The United States sent two Navy ships through the Taiwan Strait on Feb. 25 as the U.S. military increased the frequency of movement through the strategic waterway despite opposition from China.

The voyage risks further raising tensions with China but will likely be viewed by self-ruled Taiwan as a sign of support from the Trump administration amid growing friction between Taipei and Beijing.

The movement comes as President Donald Trump said the United States and China were “very, very close” to a deal to end a months-long trade war.

The U.S. Navy’s passage through the Taiwan Strait also came just days before a summit between Trump and North Korea’s Kim Jong Un.

“The ships’ transit through the Taiwan Strait demonstrates the U.S. commitment to a free and open Indo-Pacific,” the U.S. Pacific Fleet said in a statement.

The two ships were identified as the destroyer Stethem and Navy cargo and ammunition ship Cesar Chavez, the statement said. The 112 mile-wide Taiwan Strait separates Taiwan from China.

Taiwan’s armed forces had kept watch on the sailing and noticed nothing out of the ordinary, so there was no cause for alarm, it said.

Washington has no formal ties with Taiwan but is bound by law to help defend the island nation and is its main source of arms. The Pentagon says Washington has sold Taiwan more than $15 billion in weaponry since 2010.

China has been ramping up pressure to assert its sovereignty over the island, which it considers a wayward province of “one China” and sacred Chinese territory.

Beijing’s concerns about Taiwan are likely to factor strongly into this year’s Chinese defense budget, following a stern new year’s speech from Chinese leader Xi Jinping who did not renounce the use of force to bring Taiwan under Chinese rule.

The U.S. Defense Intelligence Agency released a report earlier this year describing Taiwan as the “primary driver” for China’s military modernization, which it said had made major advances in recent years.

Democratic Taiwan has shown no interest in being run by autocratic China.

Taiwan is one of a growing number of flashpoints in the U.S.-China relationship, which also include a trade war, U.S. sanctions and China’s increasingly muscular military posture in the South China Sea, where the United States also conducts freedom of navigation patrols.