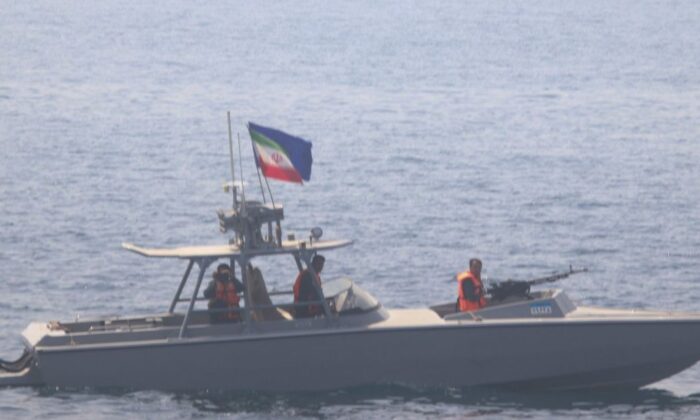 US Navy Ship Responds After Iranian Vessel Gets Too Close

“One of the IRGCN vessels approached Sirocco head-on at a dangerously high speed and only altered course after the U.S. patrol coastal ship issued audible warning signals to avoid a collision. The Iranian vessel also came within 50 yards of the U.S. Navy ship during the interaction, and Sirocco responded by deploying a warning flare,” the U.S. Fifth Fleet confirmed.

The Navy described the Iranian ships’ approach as “unsafe” and “unprofessional” in the statement.

“The full interaction among all vessels lasted one hour and ended when the IRGCN craft departed the area. U.S. Navy ships continued their transit without further incident,” according to the Navy. “The IRGCN’s actions did not meet international standards of professional or safe maritime behavior, increasing the risk of miscalculation and collision.”

The Iranian Navy often targets and harasses U.S. vessels traveling into the Persian Gulf and Strait of Hormuz, a strategically important shipping route that Iran has long attempted to gain control of. A significant portion of the world’s liquified natural gas and oil travels through the strait, which is located between Iran and the United Arab Emirates as well as Oman.

Last November, an Iranian helicopter came within 25 yards of the USS Essex amphibious warship, prompting another response from the Department of Defense. Two U.S. guided-missile destroyers and one U.S. Coast Guard ship were also seen sailing near a tanker that was captured by Iran in October of 2021.

And in 2020, the U.S. accused 11 Iranian vessels of making “unprofessional” and “unsafe” maneuvers when they sailed around U.S. warships.

Tensions have remained high in the region, with Iran’s Revolutionary Guard Corps Commander, Hossein Salami, warning other regional governments against having a role in the Persian Gulf

“We explicitly declare and warn that the continuation of such relations is not acceptable at all,” Salami said at the time, referring to Israeli naval presence in the region. “They should know that the existence of the evil Zionist regime everywhere is a cause of insecurity.”