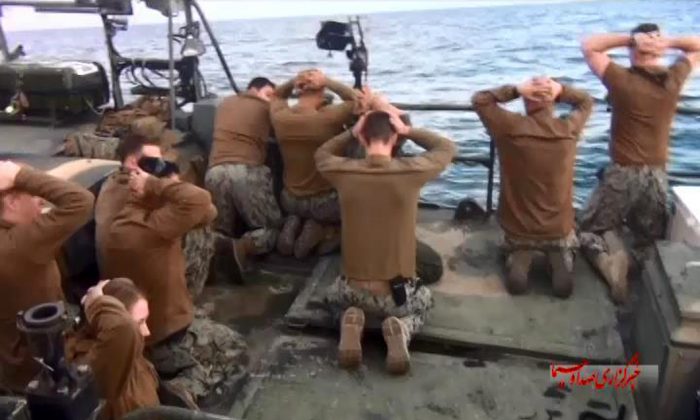 This picture released by the Iranian state-run IRIB News Agency on Wednesday, Jan. 13, 2016, shows detention of American Navy sailors by the Iranian Revolutionary Guards in the Persian Gulf, Iran. Iranian state television is reporting that all 10 U.S. sailors detained by Iran after entering its territorial waters have been released. Iran's Revolutionary Guard said the sailors were released Wednesday after it was determined that their entry was not intentional. (Sepahnews via AP)
Middle East

US Navy Report: How the Events Unfolded When American Sailors Were Detained by Iranians

Two U.S. Navy boats were on their way from Kuwait to Bahrain on Jan. 12 when one of them broke down—in Iranian territorial waters.

Moments later, the engine problem was the least of their worries.

The American sailors were detained by Iranians, and the details of the events that unfolded during the incident were released in a U.S. Navy report on Thursday.

The Iranian’s identified themselves and told the crew members to back away from their weapons.

One of the boat captains tried to tell the Iranians everything was a misunderstanding.

“Hey, I’m sorry this was an accident, we didn’t mean to be here, our boat broke down, we’re just trying to continue to Bahrain,” the boat captain told the Iranians, according to the report.

The code for the military says officers are obligated to defend their units, but in this case the boat captain tried to deescalate the situation and not fight back.

“I didn’t want to start a war with Iran,” one of the boat captains told investigators, “My thought at the end of the day was that no one had to die for a misunderstanding.”

“I thought ok, what’s the commander’s intent here,” added the official, “the Commander-in-chief would not want me to start a war over a mistake, over a misunderstanding.”

The 10 crew members were taken by the Iranians to Farsi Island where they were held overnight.

The sailors were put in a room and interrogated as a group, and then seven out of the 10 crew members were interrogated individually.

The code of U.S. Armed Forces does not allow its officials to reveal information besides certain details, but that was not followed by crew members during the incident.

“It is clear that some, if not all, crew members provided at least some information to interrogators beyond name, rank, service number, and date of birth,” the report said.

The next morning the Iranians flew in a TV news crew to film the sailors. The sailors say they were told to act happy, eat, and drink while the news team recorded them.

Then a sailor was told to read a script.

After he tried to evade reading the script that said “We were sorry that we entered into Iranian territorial waters and that we were treated well,” he was told that they would not be released until he read it exactly as was written.

When he was done, the sailors were blindfolded and led back to the small boat and on to the USS Anzio. The group were then flown by helicopter to a Qatar airbase.

Failures in Leadership and Training

“[Commanding Officer] exercised poor leadership in that he failed to set the conditions for success prior to the transit,” said the report.

“When tasked with extending the RCBs in the Northern Arabian Gulf (NAG), he failed to adapt support and oversight of his disaggregated forces, resulting in degraded RCB maintenance, declining standards, and poor morale,” it continued.

The Navy announced the day the report was released that it had taken disciplinary action against nine service members in connection with the incident.

The Navy also faulted the Iranians for violating international rules.